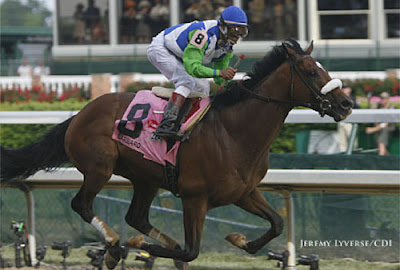 Barbaro is gone, but his historic victory in the 2006 Kentucky Derby lives on. Click here for a pole-to-pole video of that great race.

"Did he want to survive? It seemed as though he did.

"In a great racehorse, the heart and mind do the running, and the body tries to hold up."

Asks the New York Times in an editorial:

"Why should we feel so much grief at the loss of one horse? After all, this is a world in which horses are sacrificed again and again for the sport of humans. . . .

"Barbaro was exceptional because he won the Kentucky Derby and looked as if he might have a chance at the Triple Crown. But nearly everyone who met him also talked of the life he displayed, a vivid presence that was so much more visible to us because it happened to belong to a winner.

"Humans are not especially good at noticing horses, but Barbaro was easy to notice. And if his life caused us to pay attention to the possibilities of all horses, his death should cause us to pay attention to the tragedy inherent in the end of so many horses. Barbaro’s death was tragic not because it was measured against the races he might have won or even against the effort to save his life. It was tragic because of what every horse is.

"You would have to look a long, long time to find a dishonest or cruel horse. And the odds are that if you did find one, it was made cruel or dishonest by the company it kept with humans. It is no exaggeration to say that nearly every horse — Barbaro included — is pure of heart. Some are faster, some slower. Some wind up in the winner’s circle. But they should all evoke in us the generosity of conscience — a human quality, after all — that was expended in the effort to save this one horse."

If you're interested, I've done an oil painting about Barbaro posted on my own blog that you're welcome to use on your site and the Moderate Voice.