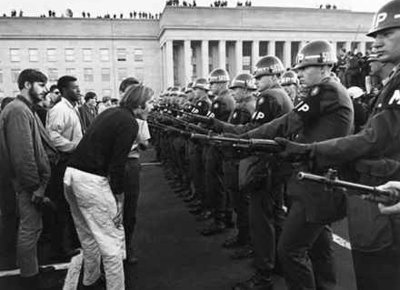 I consider myself to be fortunate to have come of age in the late 1960s, a time of enormous turbulence and change in American society. This, of course, included an anti-Vietnam War movement centered on college campuses that is credited with helping drive President Johnson from office although not hastening the end of the war, which dragged on another six years after Richard Nixon captured the White House by pledging to end it. ("With honor," by the way.)

There are plenty of parallels between the Vietnam war and the war in Iraq three-plus decades later, but a vibrant antiwar movement is not one of them.

That is pretty much the conclusion of John McMillian, who recently taught a freshman seminar at Harvard University called "From Reform to Revolution: Youth Culture in the 1960s."

"When I built the syllabus, I asked students to ponder a single, overarching question: 'How did the youth rebellion of the 1960s happen?' That is, what caused millions of young people to pierce the bland and platitudinous din that characterized the early Cold War years? Why did so many youths -- many of them affluent and college-educated -- suddenly decide that American society needed to be radically overhauled?

"But as the semester progressed, my students frequently turned the question around: Why is there no rising protest movement among young

* The civil rights movement exerted a forceful influence. There is no comparable movement today.

* The draft personalized the Vietnam War for conscriptees and their loved dones. Today's Army is all volunteer.

"But my students suggested some other reasons today's youth seem so passive. Although this high-achieving group was hardly representative, many of them spoke plaintively about being pressured from an early age to begin building their credentials for college.

" 'Students are expected to get perfect grades, excel in extracurricular activities, save the world and be home before dinner time'," quipped one freshman. . . .

"Nor are many students likely to be socialized into antiwar activism. Every campus has its left-wing organizers, but today the gauzy idealism that circulated among teenagers in the 1960s seems almost freakishly anomalous."