Iraq II: Does Anyone Else Detect a Trend? 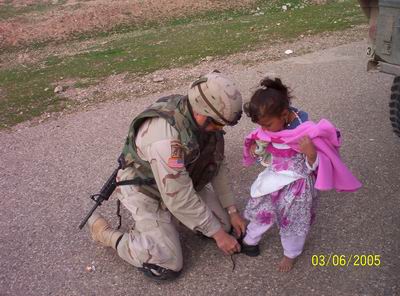 I have labored without much success to find even a sliver of silver lining in the dark cloud that is the Iraq war. But then there are folks like Subsunk at the Black Five military blog for whom the big turnaround always seems to be right around the corner.

I do not say that harshly. Subsunk is tapped into the military equation in Iraq in a way few people are. While I and many other bloggers are feeding off of headlines that play to our preconceptions, which is to say opposition to the war, I have and will continue to give people like Subsunk, who is a retired Navy submarine officer, and Bill Roggio and Grayhawk their due. They known a heck of a lot about the situation on the ground, and Roggio makes frequent trips to Iraq.

Anyhow, Subsunk has put up an interesting post quoting Nibras Kazimi of the New York Sun, who says that:

"The wider Sunni insurgency — the groups beyond Al Qaeda — is being slowly, and surely, defeated. The average insurgent today feels demoralized, disillusioned, and hunted. Those who have not been captured yet are opting for a quieter life outside of . Al Qaeda continues to grow for the time being as it cannibalizes the other insurgent groups and absorbs their most radical and hardcore fringes into its fold. The Baathists, who had been critical in spurring the initial insurgency, are becoming less and less relevant, and are drifting without a clear purpose following the hanging of their idol, Saddam Hussein. Rounding out this changing landscape is that Al Qaeda itself is getting a serious beating as the Americans improve in intelligence gathering and partner with more reliable Iraqi forces.

In other words, battling the insurgency now essentially means battling Al Qaeda. This is a major accomplishment."

Subsunk sees a trend. Is he correct? Possibly.

Does this trend bode well for the American mission? Yes, but fighting the insurgency is but a small part of the overall war.

Nevertheless, it is a part in which I take a particular interest. Among the biggest of the Bush administration's Big Lies is that Iraq had links the 9/11 attacks. There were no terrorists in the Al Qaeda mold in Saddam's Iraq, but they have poured in since then because of an utterly botched occupation.

So they're there now. Probably not as many as we're led to believe by the White House, but they're extremely dangerous nonetheless and because of their jihadist leanings more dangerous to the West in a way that other players in Iraq are not. Their fanaticism knows no borders; they just happen to be in Iraq for the time being.

If Subsunk has indeed identified a trend, then I'm all for it. And so should everyone else regardless of what they think about the war.

What a great accomplishment, to give al-Qaeda an actual battleground and real live targets to shoot at. Daily. We should be so proud of ourselves.

Too bad about the country and the people who live/die there.

Anonymous said...
This comment has been removed by a blog administrator.
3:29 PM

Yes, it is quite an accomplishment. It took an awful lot of hard work by the Bush administration to get to this sad state of affairs.