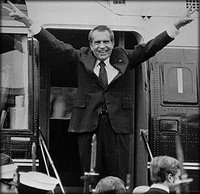 The Boo Man, trying to stir up trouble on the eve of the State of the Union address, reprises this divine exchange between President Nixon and White House counsel John Dean on March 21, 1973, five months before the president resigned.

DEAN: Uh, the reason I thought we ought to talk this morning is because in, in our conversations, uh, uh, I have, I have the impression that you don't know everything I know

PRESIDENT: You've got, in other words, I've got to know why you feel that, uh, that something . . .

PRESIDENT: . . . that, that we shouldn't unravel something.

PRESIDENT: In other words, you, your judgment as to where it stands, and where we go now---

DEAN: I think, I think that, uh, there's no doubt about the seriousness of the problem we're, we've got. We have a cancer -- within, close to the Presidency, that's growing. It's growing daily. It's compounding, it grows geometrically now because it compounds itself. Uh, that'll be clear as I explain you know, some of the details, uh, of why it is, and it basically is because (1) we're being blackmailed; (2) uh, people are going to start perjuring themself very quickly that have not had to perjure themselves to protect other people and the like. And that is just--and there is no assurance--

PRESIDENT: That it won't bust.

DEAN: That, that won't bust.