Review: 'My Family and Other Animals' 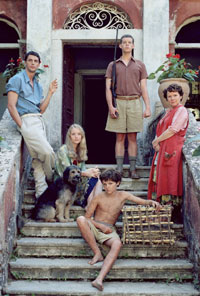 Two very different family films were featured in between the Australian Open tennis finals this past weekend at the Kiko's House living room cinema -- Little Miss Sunshine and My Family and Other Animals.

Sunshine was a box office hit and has been nominated for four Oscars, including Best Picture. This madcap comedy delivered, but it was My Family that charmed.

Based on the 1956 autobiographical work by naturalist Gerald Durrell, this 2006 Masterpiece Theater production opens with recently widowed Mother Durrell (Imedla Staunton) contemplating a fresh start for her family.

With the drumbeat of war barely discernible in 1935 Europe, they leave dreary Bournemouth, England, for beautiful and sunny Corfu in the Greek isles.

Upon their arrival, a taxi driver named Spiro (Omid Djalili) takes the family under his wing and finds them a villa. Soon Gerald is collecting all sorts of animals, including turtles, beetles, rabbits and birds, while the other Durrells embark on adventures of their own.

The wildlife and fauna in this 90-minute-long gem are intoxicating and the jazzy score delightful. My Family is not rated, but except for some slightly colorful language and mild sexual innuendo, it is appropriate for children of all ages -- including my own.

* * * * *
Gerald Durrell is famous in his own right, but is not to be confused with his brother, Lawrence Durrell, the novelist and playright whose "Alexandria Quartet" had a deep impact on me and is a personal favorite.
Posted by Shaun Mullen at 5:29 AM
Email ThisBlogThis!Share to TwitterShare to FacebookShare to Pinterest