When DSL Is NG for SOTUS by the POTUS 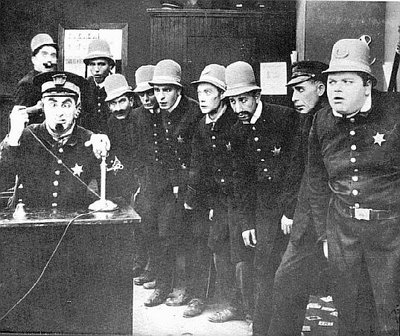 "Wuddya mean my hotel room doesn't have Internet access?"
Tuesday was a tres frustrating day if you are a blogger, or at least for some of the folks such as myself who co-blog at The Moderate Voice.

(That's TMV editor-in-chief Joe Gandelman at the left in the photograph. He's complaining about his hotel room not having high-speed Internet access. I'm on the far right trying to figure out what a moderate is.)

Anyhow, most of you don't care about the problems that bloggers have, nor should you. All you want is to be able to click on your bookmarks and download favorite blogs without a hassle. That's what we want you to be able to do, too, but just when we start taking that old blogosphere for granted, it bites us in the backside. And at the most inopportune times.

I don't know if you noticed, but these are heady days in the blogosphere.

There is so much important stuff going on -- a new "American Idol" season, Brittney's underwear (or lack of), whether the Democrats will vote George off the island, and so on -- that the challenge we bloggers face each day is not whether to blog but what to blog about.

Tuesday dawned as a day when problems would be especially inopportune because of the president's State of the Union address (the SOTUS delivered by the POTUS in blogspeak), but they came in droves.

(People who don't care to feel our pain should stop reading here.)

The vast majority of bloggers use proprietary blogging software offerered by Blogger, Powerblogs, Typepad and Wordpad. I am one of millions of poor shlunks who use Blogger, which is offered for "free" by Google.

There is an old saying that there is no such thing as a free lunch, and that applies to Blogger in spades. While it is free to download and use, it is about as reliable as a drunken uncle who climbs on the wagon and sobers up only to keep falling off.

(Many bloggers like Joe cut their blogging teeth by riding the Blogger trike usually cast off their training wheels when they get some experience under their belts, move on to better blogging software and end up using a slick 30-speed called Wordpad, where TMV moved last month because it is comparatively reliable and while not free, is a pittance compared to the frustrations of dealing with Uncle Blogger.)

Uncle Blogger was in fine form on Tuesday, stumbling from watering hole to watering hole, careening off of street light posts, barfing in the gutter and then ducking into a Salvation Army soup kitchen for brief respites from binging.

And so bloggers blogging at Blogger blogs (say that three times fast) had a pretty rough day and evening, including myself here at Kiko's House and TMV co-blogger Michael Stickings, who was all but driven to drink while live blogging SOTUS by the POTUS over at The Reaction, his most excellent blog.

This was especially frustrating for me because I had labored mightily to put up a timely post entitled Daniel Pearl's Forgotten War, a fourth anniversary remembrance of the abduction of the late Wall Street Journal reporter in Kabul and how the war he was covering has been starved of attention, troops and resources because of the POTUS's Mess in Mesopotamia.

I was feeling quite chuff about my post because the MSM hadn't done anything on Danny and I was getting a fair amount of traffic . . . that is until Uncle stated banging into streetlight posts just about the time Kiko's House gets its usual burst of mid-morning traffic. This corresponds to when your bosses go off to some stupid meeting and leave you to play Solitaire or surf the Web.

Which left me feeling like an overnight radio station deejay who wonders whether anyone is listening.

Meanwhile, 3,000 miles away (which is meaningless in cyberspace but sounds impressive as I write it), Joe was checking into a sweet little hotel outside of Seattle where he planned to update TMV with one of his wonderfully comprehensive megaposts as reaction came on from the MSM on the SOTUS by the POTUS.

But it was NG, as in no go. Which was additionally frustrating because that Matt Drudge, who acts like a snarky blogger even if he isn't one, broke the White House embargo on the SOTUS by the POTUS and posted it early, creating havoc in the MSM.

You may not appreciate the fact that the peripatetic Mr. Gandelman blogs from places with names like Pomoma, Petaluma, Pacoima, Palmdale, Pismo Beach, Peoria, Podunk and Gig Harbor, which is where he happened to be on Tuesday night.

The DSL in the sweet little hotel wouldn't work and the management of the sweet little hotel didn't want Joe to use dial-up since it ties up their sweet little switchboard. Off Joe went to the nearest Starbucks, but the wireless signal there was being overpowered by a short circuit in the latte machine, or something. He finally found a Starbucks where he was able to go online and service his accounts before returning to the sweet little hotel, where the fickle DSL finally worked and he could be at one with the MSM reaction to the SOTUS by the POTUS.

If you've stuck around this long, then I am sure you can indeed feel our pain. Thank you. By the way, the tip jar is right over there.
Posted by Shaun Mullen at 5:00 AM
Email ThisBlogThis!Share to TwitterShare to FacebookShare to Pinterest

I'm not sure the drunked uncle analogy works, as a drunken uncle is never really useful.

I think I'd prefer an analogy with a $1000 car ala the song by the Bottlerockets:

Of course the advantage of Blogger is that its free...and worth every penny.

I also notice that in the photograph you are Fatty Arbuckle. That makes you a comic genius!