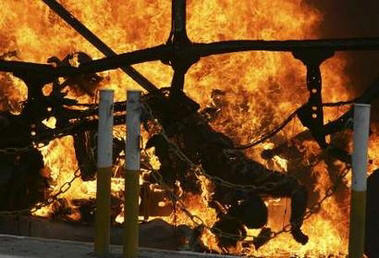 I cannot remember a State of the Union address packed with so much stuff that was so empty as the speech delivered last night by President George W. Bush.

The 2007 edition of SOTUS positively bristled with acouterments. It was less partisan than any that the president has given, which was welcome. But there was an unavoidable feeling that he was fiddling while 6,000 miles away a nation is in flames because of failures of his leadership and an overweaning arrogance that he has only barely been able to check since he and the Republican oligarchy was given a drubbing in the mid-term election.

As important the initiatives that Bush rolled out like health-care and alternative fuels may be, nothing is as imperative as trying to stanch the flames and figuring how to get the hell out of Iraq.

Yet as was obvious from the speech, the president -- and for that matter just about everyone else in the packed chamber, which had more Democratic than Republican faces for the first time in his tenure -- doesn't have a clue as to how to do either.

Dick Polman got it exactly right when he wrote at American Debate:

"President Bush’s political predicament was best illustrated by the tableau behind him. As he got ready to deliver his subdued State of the Union address, he was flanked, over his right shoulder, by Dick Cheney, perhaps the only elected leader at the moment who is more unpopular than Bush is; not to mention the fact that Cheney had his name bandied about all day during the Scooter Libby perjury trial. And Bush was flanked, over his left shoulder, by Nancy Pelosi, whose rise to the House speakership can be directly attributed to Bush’s ruinous war of choice in Iraq."

I kept coming back to that feeling of emptiness, which was no where more evident in the hollowness of the president's closing words: "We’ve met challenges and faced dangers, and we know that more lie ahead. Yet we can go forward with confidence, because the state of our union is strong, our cause in the world is right, and tonight that cause goes on."

The reality is so different: Dangers even greater because of challenges not met. A nation less confident than it has been in memory. A presidency weakened by its own self-inflicted wounds and failings. A cause that has been repeatedly subverted for political gain.

How utterly sad that this is the true state of the union.

Joe Gandelman provides a superb roundup of reaction to the speech at The Moderate Voice. Read it and weep.

Meanwhile, Michael Stickings live blogged the speech at The Reaction. It is worth reading especially if you did not see the speech live as it captures the frustration you feel when the president's words bumped up against reality.

When you read a transcript of the speech as I made myself do this morning, the olive branches talked about by many pundits seem less obvious than the attempts to bury a lot of bodies.

Meanwhile, here is Senator James Webb's response for the Democrats.

Photo of Baghdad minibus bombing this week by Namir Noor-Eldeen/Reuters
Posted by Shaun Mullen at 8:00 AM
Email ThisBlogThis!Share to TwitterShare to FacebookShare to Pinterest