Quotes du Jour on the Other War 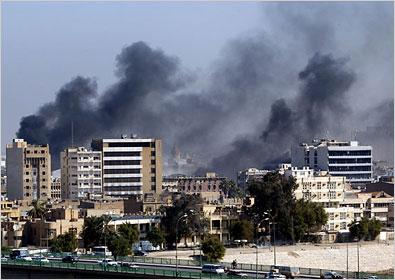 Bombs killed 88 people in a Baghdad marketplace on Monday. More here.
THE INSTAPUNDIT SORT OF JOINS THE EXODUS
Blogger Glenn Reynolds, he of Instapundit fame, has been maddenly cryptic about how he views the Iraq war, but Andrew Sullivan, he of The Daily Dish fame, has finally egged Reynolds into actually saying something:

"I thought I'd been fairly straightforward, but sometimes my thoughts, scattered across a lot of short posts, come across as more cryptic than I realize, so I appreciate being prodded to pull them together in one place. As I've said before, I don't think the number of troops is nearly as important as what we're doing with them, and that's not so clear. There's room for optimism that we're going to take a more aggressive line against insurgents in Iraq, and against Muqtada Al-Sadr in particular. There's also some reason to think we're putting the screws to Iran. On the other hand, I've been disappointed a number of times by the Bush Administration's inexplicable unwillingness to deal with Iran's fomenting of insurgency -- it's really a proxy war -- in Iraq, and with its waffling on Sadr. You win a war by making it too unpleasant for the other guy to keep fighting. The additional troops, such as they are, won't make a difference in that; only a change in approach will. I don't have a clear sense of whether we'll follow through.

"I'm not as disappointed in Bush as, say, Bill Quick, but I'm disappointed. As I've noted in the past, the Iraq invasion was supposed to be the first step in transforming the region, but once we got there we seemed to lose all momentum, and all interesting in putting pressure on Iran and Syria. As the Talleyrand said, you can do anything with bayonets except sit on them.

"I also think that Bush's loss of support on the war stems from the loss of visible forward motion. The casualties per se aren't the problem (we've lost fewer troops in nearly four years than we were expected to lose in the initial push to Baghdad), so much as the sense that we're taking casualties and nothing is happening. This impatience is perhaps unfortunate, but it's a well-known characteristic in the Pentagon (where people were talking about the "three year rule" on support for wars back in 2003) and the Bush Administration doesn't seem to have had a strategy for dealing with it."

Thanks for sharing, Glenn. I think.

WHAT GEORGE BUSH NEEDS TO DO

Speaking of Sullivan, he notes that Senator John Warner of Virginia has been his "rough guage of whether this president truly has lost his own party on the conduct of the war." Well, Warner ain't having any part of the "surge strategy:"

"The American G.I. was not trained, not sent over there — certainly not by resolution of this institution — to be placed in the middle of a fight between the Sunni and the Shia and the wanton and just incomprehensible killing that's going on at this time. We don't lessen importance of that mission, but it should be performed by the Iraqi forces and not the coalition forces."

WHAT CONGRESS NEEDS TO DO
Says the New York Times in an editorial:

"President Bush’s refusal to come up with a serious policy on Iraq means that the Democrats will have to goad him toward one. Congress needs to do more than just oppose the latest ill-conceived military escalation. It needs to insist that American troops are not captive to the destructive policies of an Iraqi government for which sectarian revenge counts for more than national unity and civil peace.

"To do that, it needs to demand that Mr. Bush impose firm, enforceable benchmarks on Prime Minister Nuri Kamal al-Maliki — if any American troops are going to remain in Iraq.

"In the Senate a nonbinding, bipartisan resolution seems headed toward early passage. Sponsored by Joseph Biden, Chuck Hagel and Carl Levin, it expresses strong opposition to sending more troops, citing the failure of the Iraqi government to keep its past promises on national reconciliation.

"Passing this resolution by the widest possible bipartisan margin would be a good first step. It would make clear to the American people (who called for a change last November), to President Bush (who didn’t listen) and to Mr. Maliki (who didn’t seem to notice) that the days of uncritical American support for Shiite misrule are over."

IF YOU SAY SO, LIZ

Liz Cheney, the vice president's daughter, weighs in on the Mess in Mesopotamia in a WaPo op-ed piece:

"I suppose Hillary Clinton's announcement was a sign of progress. In 2007, a woman can run for president and show the same level of courage and conviction about this war many of her male colleagues have. Steel in the spine? Not so much.

"America deserves better. It's time for everyone -- Republicans and Democrats -- to stop trying to find ways for America to quit. Victory is the only option. We must have the fortitude and the courage to do what it takes. In the words of Winston Churchill, we must deserve victory.

SO NOW HE TELLS US
Speaking of the vice president and not his daughter, John McCain seems to be thinking a little more clearly about the war these days. He tells Roger Simon at The Politico that:

TAKE THAT BILL KRISTOL!
Libby Spenser responds at The Reaction to Weekly Standard blowhard William Kristol, who says that opponents of escalating the war in Congress are “leap-frogging each other in the degrees of irresponsibility they’re willing to advocate.”

“Kristol was wrong from the beginning and he continues to compound his errors by refusing to admit the flaws in his theories. If it was only Kristol's reputation on the line, perhaps one wouldn't bother to even respond, but this man has the president's ear and his words don't only affect his paycheck, they put the lives of thousands of troops in danger. If anyone is being irresponsible, it's Kristol for putting his own self-interest above the greater good for our troops and our nation.

“ . . . as long as men like Kristol are given credibility and a forum by our MSM on account of their parents' connections, they will continue to ‘lead’ our policy. And that's just plain frightening.”

Photograph by Ahmad Al-Rubaye/AFP-Getty Images
Posted by Shaun Mullen at 5:23 AM
Email ThisBlogThis!Share to TwitterShare to FacebookShare to Pinterest