What a Wicked Web They Weave 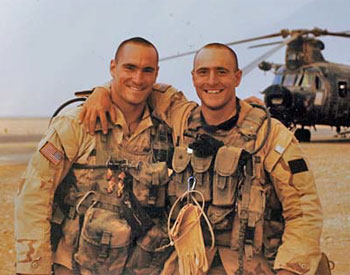 Pat and Kevin Tillman in Saudia Arabia, 2003
Disinformation is an important aspect of any successful military campaign, but bald-faced lying when it serves no strategic purpose is reprehensibly vile and dishonors soldiers everywhere.

In yet another perverse instance in which the Pentagon intentionally lied to turn a tragic incident into a public-relations device, it turns out that four American troopers did not die repelling a sneak attack at the governor's office in the Shiite holy city of Karbala on January 20, as had been trumpeted.

They were found dead or dying as far as 25 miles away after being abducted.

Meanwhile, just ask Jessica Lynch what it's like to be used by the Pentagon PR machine. Lynch's abduction in the early hours of the Iraq war was grossly distorted on the orders of higher ups. Or taking a more benign point of view, errors in the news media were intentionally not corrected.

Or ask the family of former NFL star and Afghan war hero Pat Tillman. This is what his brother, Kevin, has to say about being used.
Posted by Shaun Mullen at 5:21 AM
Email ThisBlogThis!Share to TwitterShare to FacebookShare to Pinterest