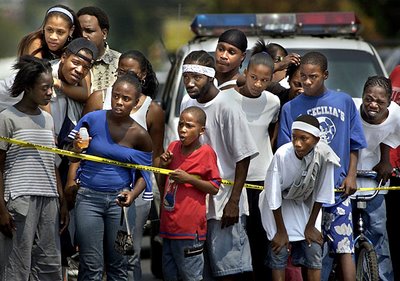 An all too familiar (murder) scene in Philadelphia
A while back, I posted a lengthy treatise called Crime & Punishment: A Tale of Two Cities. It explained why New York City's murder rate was at historic modern-day lows, but Philadelphia's was out of control.

A big reason, but by no means not the only reason, for the epidemic of homicides in the . . . er, City of Brotherly Love is that the mayor and police commissioner, both blacks, simply are not up to the task of telling the black community -- where a vast majority of the killing occurs -- to get its sh*t together. Or else.

But that may be changing:

"Nutter says it's the only way to regain law and order.

" 'I will not sit by and watch this kind of genocide in our community,' Nutter said yesterday as he announced his crime plan - titled 'Safety Now' - in . 'This daily death toll is destroying families'."

Crime experts said such targeted enforcement has proved effective in other cities. But some questioned whether the forceful tactics could backfire."

By the way, Nutter also is black. More here.