Dr. King & Another War in Another Time 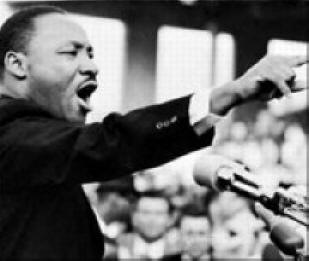 It seems especially appropriate to recall Dr. Martin Luther King Jr.'s April 4, 1967 speech declaring his opposition to the Vietnam War given another that we live in a time with another unpopular war also seemingly without end.

Dr. King was criticized by some civil rights leaders for the speech, which was delivered at a meeting of an antiwar group at in . Why, they asked, was he concerning himself about an issue that seemed to be divorced from the concerns and goals of a civil rights movement that was striving for equality for black Americans?

I come to this magnificent house of worship tonight because my conscience leaves me no other choice. I join you in this meeting because I am in deepest agreement with the aims and work of the organization which has brought us together: Clergy and Laymen Concerned about . The recent statements of your executive committee are the sentiments of my own heart, and I found myself in full accord when I read its opening lines: "A time comes when silence is betrayal." And that time has come for us in relation to .

The truth of these words is beyond doubt, but the mission to which they call us is a most difficult one. Even when pressed by the demands of inner truth, men do not easily assume the task of opposing their government's policy, especially in time of war. Nor does the human spirit move without great difficulty against all the apathy of conformist thought within one's own bosom and in the surrounding world. Moreover, when the issues at hand seem as perplexed as they often do in the case of this dreadful conflict, we are always on the verge of being mesmerized by uncertainty; but we must move on.

* * * * *
Over the past two years, as I have moved to break the betrayal of my own silences and to speak from the burnings of my own heart, as I have called for radical departures from the destruction of Vietnam, many persons have questioned me about the wisdom of my path. At the heart of their concerns this query has often loomed large and loud: "Why are you speaking about the war, Dr. King?" "Why are you joining the voices of dissent?" "Peace and civil rights don't mix," they say. "Aren't you hurting the cause of your people," they ask? And when I hear them, though I often understand the source of their concern, I am nevertheless greatly saddened, for such questions mean that the inquirers have not really known me, my commitment or my calling. Indeed, their questions suggest that they do not know the world in which they live. In the light of such tragic misunderstanding, I deem it of signal importance to try to state clearly, and I trust concisely, why I believe that the path from -- the church in , where I began my pastorate -- leads clearly to this sanctuary tonight.
Perhaps the more tragic recognition of reality took place when it became clear to me that the war was doing far more than devastating the hopes of the poor at home. It was sending their sons and their brothers and their husbands to fight and to die in extraordinarily high proportions relative to the rest of the population. We were taking the black young men who had been crippled by our society and sending them eight thousand miles away to guarantee liberties in which they had not found in southwest and . And so we have been repeatedly faced with the cruel irony of watching Negro and white boys on TV screens as they kill and die together for a nation that has been unable to seat them together in the same schools. And so we watch them in brutal solidarity burning the huts of a poor village, but we realize that they would hardly live on the same block in . I could not be silent in the face of such cruel manipulation of the poor.

So they go, primarily women and children and the aged. They watch as we poison their water, as we kill a million acres of their crops. They must weep as the bulldozers roar through their areas preparing to destroy the precious trees. They wander into the hospitals with at least twenty casualties from American firepower for one Vietcong-inflicted injury. So far we may have killed a million of them, mostly children. They wander into the towns and see thousands of the children, homeless, without clothes, running in packs on the streets like animals. They see the children degraded by our soldiers as they beg for food. They see the children selling their sisters to our soldiers, soliciting for their mothers.

What do the peasants think as we ally ourselves with the landlords and as we refuse to put any action into our many words concerning land reform? What do they think as we test out our latest weapons on them, just as the Germans tested out new medicine and new tortures in the concentration camps of ? Where are the roots of the independent we claim to be building? Is it among these voiceless ones?

* * * * *
If we continue, there will be no doubt in my mind and in the mind of the world that we have no honorable intentions in . If we do not stop our war against the people of immediately, the world will be left with no other alternative than to see this as some horrible, clumsy, and deadly game we have decided to play. The world now demands a maturity of that we may not be able to achieve. It demands that we admit that we have been wrong from the beginning of our adventure in , that we have been detrimental to the life of the Vietnamese people. The situation is one in which we must be ready to turn sharply from our present ways. In order to atone for our sins and errors in , we should take the initiative in bringing a halt to this tragic war.
We can no longer afford to worship the god of hate or bow before the altar of retaliation. The oceans of history are made turbulent by the ever-rising tides of hate. And history is cluttered with the wreckage of nations and individuals that pursued this self-defeating path of hate. As Arnold Toynbee says: "Love is the ultimate force that makes for the saving choice of life and good against the damning choice of death and evil. Therefore the first hope in our inventory must be the hope that love is going to have the last word."We are now faced with the fact, my friends, that tomorrow is today. We are confronted with the fierce urgency of now. In this unfolding conundrum of life and history, there is such a thing as being too late. Procrastination is still the thief of time. Life often leaves us standing bare, naked, and dejected with a lost opportunity. The tide in the affairs of men does not remain at flood -- it ebbs. We may cry out desperately for time to pause in her passage, but time is adamant to every plea and rushes on. Over the bleached bones and jumbled residues of numerous civilizations are written the pathetic words, "Too late." There is an invisible book of life that faithfully records our vigilance or our neglect. Omar Khayyam is right: "The moving finger writes, and having writ moves on."We still have a choice today: nonviolent coexistence or violent coannihilation. We must move past indecision to action. We must find new ways to speak for peace in and justice throughout the developing world, a world that borders on our doors. If we do not act, we shall surely be dragged down the long, dark, and shameful corridors of time reserved for those who possess power without compassion, might without morality, and strength without sight.

Now let us begin. Now let us rededicate ourselves to the long and bitter, but beautiful, struggle for a new world. This is the calling of the sons of God, and our brothers wait eagerly for our response. Shall we say the odds are too great? Shall we tell them the struggle is too hard? Will our message be that the forces of American life militate against their arrival as full men, and we send our deepest regrets? Or will there be another message -- of longing, of hope, of solidarity with their yearnings, of commitment to their cause, whatever the cost? The choice is ours, and though we might prefer it otherwise, we must choose in this crucial moment of human history.

And if we will only make the right choice, we will be able to transform this pending cosmic elegy into a creative psalm of peace.