The Najaf Siege: Onward Through the Fog 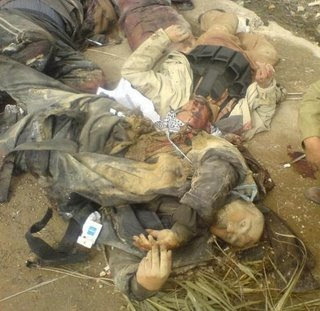 Man identified as sect leader (foreground) lies dead after siege
Now that the dust has settled from the weekend battle near the holy city of Najaf, we learn that Iraqi forces were nearly overwhelmed by the ferocity of the Soldiers of Heaven, a hitherto obscure apocalyptic sect, and needed far more help from American forces than had been previously disclosed.

Beyond that troubling but not surprisingly relevation is the fact that hundreds of armed men were able to set up an elaborate encampment -- which which included tunnels, trenches and was defended by heavy machine guns and antiaircraft weapons -- right under the noses of the Iraqis.

A roundup of comments on the siege, which left at least 260 insurgents dead and nearly as many wounded:

"The post-battle assessments should be interesting. Intelligence forces must be wondering why insurgents would attempt a straight-up fight against the Iraqis, and whether that indicates overconfidence or desperation."

Dave Schuler at Outside the Beltway:

"Aren't large pitched battles like this characteristic of insurgencies that believe they are on the upswing? Not particularly good news."

Bill Roggio at The Third Rail:

"News reports indicate a significant involvement of foreign fighters . . . Our intelligence source warns us that the Shia cult did have an international following, however the belief is some of the foreign fighters were indeed members of al-Qaeda's Omar Brigade. . . .Iraqi officials in Najaf are convinced al-Qaeda had a hand in the fighting. . . .The fog of war is still thick in Najaf, and time will tell if this narrative proves accurate."

"So let me get this straight. The Iraqi officials can't agree on who they were fighting or who their leader was, so how did they figure out all these colourful details about 'brainwashed women and children' and the intentions of killing all clerics or bombing the shrine or taking over the shrine, etc.? . . . Also, alleged eyewitnesses said they saw fighters in 'Afghan robes.' What is an Afghan robe, anyway? I doubt someone from Kufa would know an Afghan robe when they see it. Also, why doesn't the government produce the evidence that foreign fighters have been captured?"

And finally, President Bush at his dim-witted best on National Public Radio:

"The government knew that the Soldiers of Heaven had set up camp in the area, but officials said they thought they were there to worship together."

Photograph by AFP
Posted by Shaun Mullen at 5:36 AM
Email ThisBlogThis!Share to TwitterShare to FacebookShare to Pinterest