New Orleans: Where Failure Is An Option 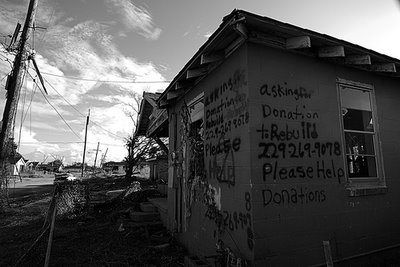 I was remiss in not noting yesterday that while President Bush mentioned Iraq and Iran multiple times in his State of the Union address, as well as Afghanistan, the Atlantic Ocean, Belarus, Burma, China, Darfur, Egypt, Harlem, Japan, North and South Korea, Lebanon, Russia, Saudia Arabia, Syria and Washington, D.C., he did not mention New Orleans.

"Failure is not an option" in Iraq, but a city that has lost half its population because it was twice ravaged -- first by Hurricane Katrina and then by a tardy, inept and politically driven federal response -- has dropped off the White House radar.

In last year's State of the Union, Bush waxed eloquent:

“A hopeful society comes to the aid of fellow citizens in times of suffering and emergency -- and stays at it until they're back on their feet. So far the federal government has committed $85 billion to the people of the and . We're removing debris and repairing highways and rebuilding stronger levees. We're providing business loans and housing assistance. Yet as we meet these immediate needs, we must also address deeper challenges that existed before the storm arrived.”

And could it be that, as in other cases, Katrina aid is being diverted to Iraq?

Click here for more on that question, and here for Polimom's eloquent but angry take on this sad state of affairs.

Hat tip to Will Bunch at Attytood
Photograph by Matt, who blogs at 1115.0rg. More of hhis photos here.