The Vietnamization of the Iraq War 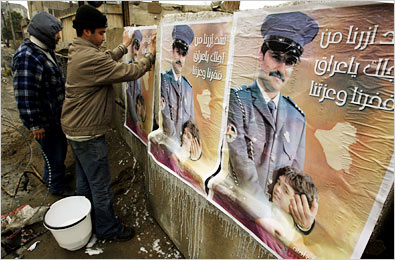 Posters read, “We will do our best for the sake of Iraq, our pride and glory”
I'm not buying the notion being peddled by some pundits that the war in Iraq is a carbon copy of the Vietnam War. Having noted that, a word that carries with it some very heavy baggage has re-entered the popular lexicon since President Bush's "surge" speech last week.

That would be Vietnamization.

In 1968, Richard Nixon won the White House by saying that he had a plan to end the war in Vietnam and bring "peace with honor."

No such plan existed and the U.S. commitment would continue for another five years.

The goal then became buying the U.S. military enough time to build up the strength of the South Vietnamese army and air force so that they could defend their nation on their own.

This became known as Vietnamization, and in its present context is yet another indication that the president's "surge" strategy, which depends on buying time while training up the Iraqi military, is being viewed as yet another ingredient in a failure of astonishing proportions.

ON A PRAYER AND NO WINGS
As noted, South Vietnam had an air force. The Iraqi air force, such as it was, ceased to exist in the first hours of the March 2003 invasion because Saddam knew that using his precious few aircraft was foolhardy.

This begs a question:

Deadly strikes by U.S. aircraft have been an essential factor in successes against the insurgency. In many instances, they also have been the difference in improving the combat capability of the Iraqi army.

But when the U.S. withdraws, it will take its attack helicopters, fighter jets and bombers with it.

The prospect of there being an Iraqi air force in the near future, and why should their not be, raises its own issues.

Will the Shiites call in air strikes to take out Sunni rivals? And although it hasn't gotten much ink, there has been damned little collateral damage against the civilian population from the precision laser-guided bombs that Air Force warplanes have used in crowded urban areas. Would the Iraqis be as good? Would it matter to them?

Then there's that Vietnam thing again:

Replacing boot power with air power didn't work in Vietnam. It won't work in Iraq, either.

Posted by Shaun Mullen at 6:09 AM
Email ThisBlogThis!Share to TwitterShare to FacebookShare to Pinterest

“I want to put Vietnam in context. We of the Kennedy and Johnson administrations who participated in the decisions on Vietnam acted according to what we thought were the principles and traditions of this nation. We made our decisions in the light of those values, yet we were wrong, terribly wrong. We owe it to future generations to explain why. I truly believe that we made an error, not of values and intentions, but of judgment and capabilities.” – Robert S. McNamara, “In Retrospect”

Even after all these years, I still harbor pretty intense feelings against the guy, but his mea cupla was sincere and is an important part of the historic record.