Up Your Nose With a Rubber Hose, Cully 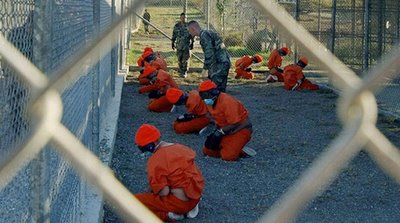 As noted in the previous post, the Bush administration's long knives are out for lawyers at top firms who do pro bono work for Guantánamo Bay detainees.

The attack is particularly insidious because leading the charge is Charles D. "Cully" Stimson, the senior Pentagon official who oversees the Rumsfeld Gulag. Stimson urged truly patriotic companies to stop doing business with these firms, becoming only the latest administration official to reveal a contemptible disdain for the core American rights that we are supposedly fighting the War on Terror to protect.

No matter that the Pentagon later said Stimson's views are not representative and Stimson has apologized in a letter today to the WaPo. The damage has been done.

H. Candace Gorman, a Chicago-based employment lawyer, is defending two Gitmo detainees and is one of the lawyers in the crosshairs. Here, in full, is a letter that she wrote to Stimson:

Where do I begin?

Perhaps we should start by correcting the record (that is what real attorneys do). These media people were a little too fast on the draw in quoting you and well you know... fair is fair.

You were reported as saying (not in response to any question so it is clear that you must have been planning this... and you did have the list of law firms with you for your little radio broadcast...)

"Actually you know I think the news story that you're really going to start seeing in the next couple of weeks is this: As a result of a FOIA request through a major news organization, somebody asked, who are the lawyers around this country representing detainees down there, and you know what, it's shocking. The major law firms in this country..."

(Let me just inject here that you listed a few of the big firms involved but I want to tell you that a lot of the Guantánamo attorneys feel slighted that you didn't mention them... myself included... although I suppose I am not a big enough firm with only two attorneys. But you never know Cully; I could have big corporate clients too!)

(You then go on to suggest that the attorneys might be on somebody's payroll... ohh, Cully if only that were true I might have made a profit last year instead of ending up in the red....) So let us first tell everyone what you really said because it really was not the more neutral (or should I say less insidious) "and we want to watch that play out" was it Cully? No what you really said was "and it'd be FUN to watch that play out." Is that how you have fun Cully? And here I thought you had your fun watching men (that you must know have done nothing wrong) languish at Guantanamo without charges and otherwise dismantling our Constitution.

So Cully now that we have cleared up what you actually said, I am dying to know how long you and Monica Crowley have been working on this story? Did you find her or did she find you? Any money change hands? Maybe some kind of special grant? We know how this administration likes to pay for what it thinks could be a good story (oops on this one, huh?) You sounded so proud of yourself on that little radio show... it was so clear listening to you that you just couldn't wait any longer to spill the beans. Is Monica mad at you now?... her little story won't be much of a story now... and she spent $50 on the FOIA request! Maybe a reimbursement is in order, if you haven't already... or did you waive the fee for her?

And Cully what about those "terrorist who hit their (the CEO's) bottom line"? What is that all about? See a lot of us looked at what happened on September 11th , in terms of the human cost but you seem to think of that sorrowful event a little bit differently. It seems you don't think that the corporate CEO's should be mad at these attorneys because the CEO's hate terrorists or are flag waving Americans, your concern seems to be (and you think the corporate CEO's share your concern) that the tragedy of 2001 was the corporate bottom line. Geez Cully is that what this is all about?

Cully, I am not even going to bother to ask why you (an attorney yourself and the assistant secretary of defense for detainee affairs) think it is appropriate to try and exert financial pressure against the lawyers who are representing Guantanamo detainees. You obviously skipped ethics in law school (I didn't know you could skip that class but maybe you had connections?) Let me just point out that the big firms that have been involved in this litigation have not tried to hide their involvement from anyone (nor have the teeny tiny firms like mine). You probably don't read newspapers but almost everyday across this wonderful country of ours you will see op-eds and letters to the editor from these very same attorneys, proudly signing their names and the firms that they are with. You see Cully we are proud of what we are doing. I bet you can't say the same.

Posted by Shaun Mullen at 8:39 AM
Email ThisBlogThis!Share to TwitterShare to FacebookShare to Pinterest