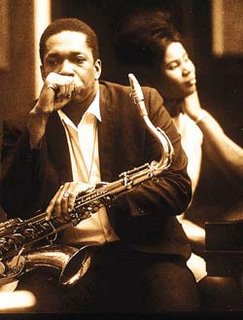 It is kind of unfair to include a photograph of Alice Coltrane sitting behind her husband, John, in a tribute to this remarkable woman, who died at age 69 on Friday in Los Angeles.

Although I suppose that Alice Coltrane always was in the shadow of the great jazz saxophonist, she most certainly took a road less traveled as a jazz harpist and later as Swami Turiyasangitananda, a spiritual leader who was the guiding presence at the ashram she founded in the Santa Monica mountains.

Alice was playing piano and vibraphone in a group led by drummer Terry Gibbs when she met John in 1962, his career already well established.


They married in 1965 after John's divoce from Naima Grubbs. By that time she and Coltrane had already had two of their three children together — John Jr., who died in 1982, and Ravi, who is an acclaimed jazz saxophonist in his own right.


Her playing was incredibly dense with sweeping arpeggios and joined John's band at a time when his moving was moving in a more spiritual direction as he embraced Eastern philosophy and religion, which became the focus of her life.


Her 1970 album, "Journey in Satchidananda" with Pharoah Sanders, is a personal favorite.

More here on Alice Coltrane. Click here for my tribute to John Coltrane last September on what would have been his 80th birthday.


* * * * *
We lost another jazz great over the weekend, tenor saxophonist Michael Brecker, who was 57. More here.