'The Day When They Scolded a Corpse' 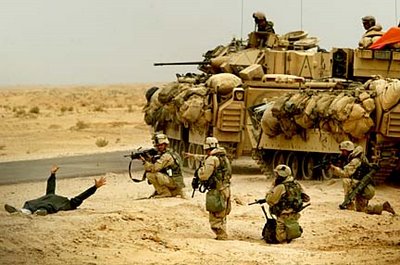 A reader writes to Andrew Sullivan at The Daily Dish:

I'm in the Marine Corps. I just returned home from seven months in Anbar Province. I'm deploying again in April. There's a girl I want to marry, but I can't. Out of 18 months, I will have spent a mere 6 at home. I can't marry her, because I'm never here. She'll probably leave me because of this surge, and it's not her fault.

I'm not unique. What I mean to say is this -- the nation at large has no idea what we're going through. I go surfing in the mornings, and I see all these teenagers with shrapnel scars and grim faces. We're all damaged.

So I wrote a poem this morning. Because I'm angry and I want it to be real to people who argue about it but have no idea what it's all about. Read this. Does it make sense to you? Do you understand?

They heard it twice; bombs do that when they crack
across the dunes, a groan chasing a clap
In the desert, where blue eyed boys in armor
listen, pink faced, to the wind and know
It's the sound of someone dying when they
see the truck all mangled on the roadside
The thin man all blown to pieces inside
and, for a heartbeat, feel, because maybe
He was just an old man, driving home but
they see the next bomb with him meant for some
Pot-hole, dead goat, trash pile, old car, young man -
deadly, they know, like their dead friends, and now
They don't shrink from saying to him, "Fucker,"
they say, "The first rule is, fucker, be sure
Where you put the last one, fucker." Laughing
without pity for him who is scattered
Bloody around the boys who die now too
because they aren't repulsed by the sight of
This thing, anymore, that they'll take home, thinking
of the day when they scolded a corpse