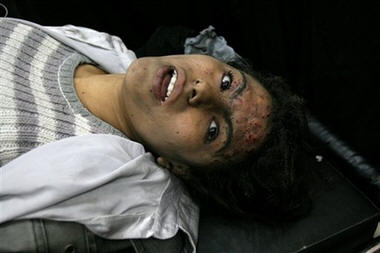 A woman lays injured at a Baghdad market after a double bombing killed 15
Avedon Carol, writing at The Sideshow:

"In the run up to the invasion of Iraq, no one provided a credible justification for the war. It was obvious that we did not have to invade Iraq. This is the overriding fact: Invading a nation without cause (you can call it "preemptive", but that just means you don't have cause) is breathtakingly immoral and equally stupid and you do not do it.

"In the particular case, starting a war in Iraq was even more breathtakingly stupid than if it had happened during some sublimely peaceful moment that didn't happen to be while our success in Afghanistan was unconfirmed and by no means assured. We had already started a war, and had shown no signs of having accomplished the things that needed to be done if we were to be successful in Afghanistan. To start a new war at such a time was so obviously insane that it was simply incredible that anyone would suggest it.

"There was also the fact that we were supposedly opposing religious extremists, and Iraq didn't fit into that category. Whatever else was wrong with Iraq, it was secular, and entirely unsympathetic to Al Qaeda. Moreover, removing Saddam from power risked setting off sectarian unrest that stood a very high chance of eliminating secular government in the country. It was a bad time to create new theocratic Muslim states, and there was also a high likelihood that a lot of sectarian blood-letting would follow. And that unrest could spread, too. Iraq was best left alone."