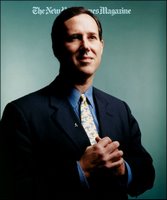 You say most people do not recognize it, and the talk you hear a lot these days is that the president is just going his own way, not listening to the people, not listening to Congress. What do you have to say about that?

Santorum: Good for him. What i would say is that the Commander-in-Chief in the United States, in Lincoln-esque type of form, has to understand the information that he is given, the the vast — that the vast majority of which the American public do not have, and he has to act in the national security interest of this country.