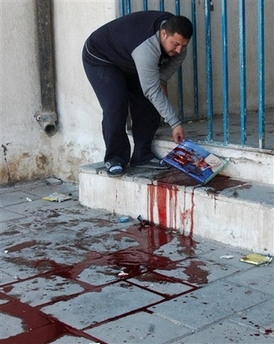 Five dead in mortar attack on Baghdad girls school. More here.
My parents told me stories of how they had to walk miles through rain and snow to get to school when they were children. What will today's generation of young Iraqi's tell their children about their own treks during the war?

Millions of Iraqi children are being robbed of their childhoods. You might called it armed robbery.

The Iraqi Ministry of Education estimates that only 30 percent of the 3.5 million Iraqi elementary-age children are attending school now, down from 75 percent last year.

Jonathan Powers, manager of the War Kids Relief Program of the Vietnam Veterans of America Foundation, addresses this crises in an article, "Iraq's Youth in a Time of War," in an issue of the John Hopkins' School of Advanced International Studies Review Journal.

For a blast from the past, check out the now inactive website of Campaign Against Sanctions in Iraq. Remember those U.N. sanctions, which did more to harm ordinary Iraqis that Saddam's regime?

The website cited a U.N. document prepared during the run-up to the 2003 invasion that predicted:

Has this come to pass? Damned if I know.

* * * * *
Meanwhile, Operation Iraqi Children raises funds to send school supply kits to Iraq. Click here for more info. (Please note that this is not an endorsement of this group.)

Portions of this post originally appeared in October 2006
Photograph by The Associated Press
Posted by Shaun Mullen at 6:20 AM
Email ThisBlogThis!Share to TwitterShare to FacebookShare to Pinterest