Not Exactly the Trial of the Century, But . . . 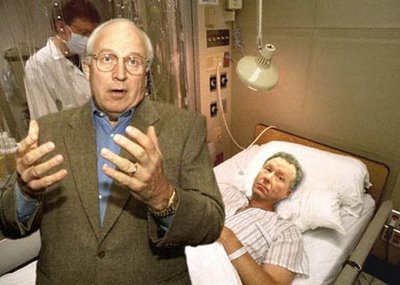 "I didn't mean to shoot him, Your Honor. Honest!"
There is an anticlimactic air surrounding the perjury trial of L. Lewis "Scooter" Libby, which gets under way today in Washington.

For one thing, to the dismay of lefties and overeager reporters everywhere, White House consigliere Karl Rove skated despite having his dirty hands all over the Joseph Wilson-Valerie Plame affair.

For another, President Bush, who repeatedly called leakers of secret government documents traitors, has acknowledged that he was the key leaker, and it has become obvious that he is the greatest danger to national security.

For yet another, Wilson and Plame have not exactly survived unscathed the scrutiny their actions have been given, and it is evident that their motivations since the leak that outted Mrs. Wilson as a CIA operative have not been entirely altruistic.

And then there's the Iraq war itself, the consequences of which are now so immensely catastrophic that the trial of Vice President Cheney's former chief of staff, even with a cameo appearance by the veep himself, seems pretty penny ante.

I do not want to downplay the importance of the trial for hopefully revealing more dirt on how the administration dealt with critics of the war, let alone how the case prepared by independent prosecutor Patrick Fitzgerald holds up.

But for this journalist, the most important legacy of the affair is the blow to its credibility that The New York Times took because of the actions of Judith Miller, its rogue WMDs reporter, and her compliant editors, up to and including the Times' executive editor and publisher.

We depended on the Times to tell us what was really going on as the Bush administration's rationales for the war began to unravel. But the Gray Lady not only let us down, it bought into the White House's game until long after it became obvious that Miller and the American people had been diddled.

It is probable the Bush will grant Libby a pardon if he is convicted. But for me what the Times did was unpardonable and has diminished its greatness.
Posted by Shaun Mullen at 6:00 AM
Email ThisBlogThis!Share to TwitterShare to FacebookShare to Pinterest