They're Fighting Over My Mural 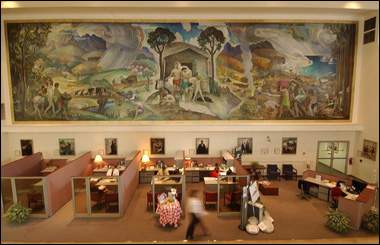 Back when I was a little sprat, I opened my very first savings account at the Wilmington Savings Fund Society office on Market Street in that northern Delaware city, a semi-bustling burg of 80,000 or so souls dominated by the mighty Du Pont Company.

She replied that it was N.C. Wyeth's "The Apothesis of the Family."

Every time my deposit book filled up and I returned to WSFS, I would gaze up at "The Apothesis," which had the effect of making me feel very small in stature but at the same time very big since I was old enough to have my money in Wilmington's premier savings bank.

Fast forward more years than I care to remember. Du Pont still has a presence in Wilmington, but it is a considerably diminshed one as the once giant chemical maker has stumbled trying to branch out from its longtime moneymakers in synthetic fibers, paints and such into new markets like pharmaceuticals and genetic engineering. The city's skyline is now dominated by big out-of-town banks that have opened credit-card operations to take advantage of Delaware's welcoming banking laws.

As a result, "The Apothesis" is now caught in a tug-of-war between two communities:

Wilmington art interests who cannot abide the thought of the mural leaving its home on the banks of the Brandywine. After all, they note, the Wyeths are the embodiment of the Brandywine School of American art.

Art interests on the central Maine coast where the Wyeths have long vacationed and N.C. Wyeth's grandson, Jamie, now lives. After all, they note, the Wyeths are practically Down Easters themselves.

Such artsy schmartsy tugs of war are not unusual, and Philadelphia recently went through an especially expensive tussle over "The Gross Clinic," the Thomas Eakins masterpiece, which the city ransomed for $78 million.

Everyone is being circumspect about the value of the "The Apothesis," but it probably is worth in the low several millions of dollars.

The mural includes boyhood likenesses of Andrew Wyeth, who posed as a model for Newell Conyers Wyeth, his father. It was commissioned by WSFS for its centennial and was unveiled in 1932.

Andrew Wyeth is probably the best known American artist of the 20th century. Reproductions of his works, including the ubiquitous "Christina's World," are everywhere. While realism is not my bag (it only occupies a corner of it), I acknowledge that Andrew is damned good. But it is N.C. Wyeth's wonderful illustrations, as opposed to his paintings, that have captured my imagination since I was a child.

N.C. illustrated many magazine covers, as well as slip-case editions of Robert Louis Stevenson's "Kidnapped" and "Treasure Island" that I was given by my grandparents before I was able to read. He also illustrated editions of "The Yearling," "The Last of the Mohicans" and "Robinson Crusoe," among many other children's classics.

You know, the kind of books that fuel young imaginations. And keep giving pleasure to those of us who refuse to ever completely grow up.

Below is a selection of some of my favorite N.C. Wyeth
illustrations and paintings. Enjoy.
Posted by Shaun Mullen at 12:02 AM
Email ThisBlogThis!Share to TwitterShare to FacebookShare to Pinterest