The Press Corpse: Hate It Or Hate It 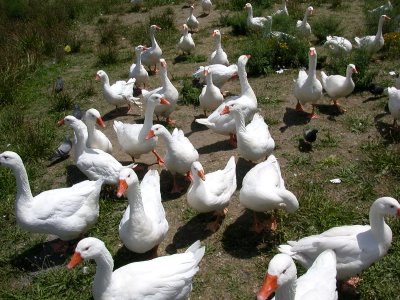 I don't know how else to put it:

The White House press corpse is a bunch of silly geese.

I already knew that it was spineless having watched it roll over pretty much en masse whenever a tough question has been in order at a press conference, but the news that the White House Correspondents Association has instructed comedian-emcee Rich Little to not say anything untoward about President Bush or the Iraq war at its forthcoming annual dinner smacks of . . . well, censorship.

AN INK-STAINED STAB IN THE BACK
It is amazing that otherwise intelligent people continue to blame the news media for the failure of the Iraq war. This piece of thread from Protein Wisdom is illustrative:

"The only battles we are loosing are on the propaganda front, and with 5th columnists like Campos & Co., is it really any wonder? General Giap of North Vietnam has been quoted as saying that the North knew they were beaten on the battlefield, but grimly hung on counting on Hanoi Jane and Co. to snatch defeat from the Jaws of U.S. victory for them. Plus ca change."

Juan Cole has more over at Balloon Juice.
Posted by Shaun Mullen at 1:41 PM
Email ThisBlogThis!Share to TwitterShare to FacebookShare to Pinterest