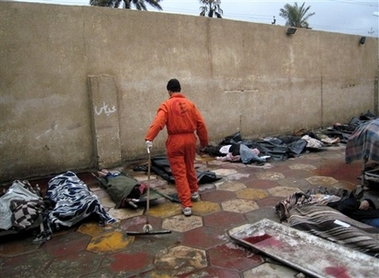 A hospital cleaner moves past bodies at a Baghdad morgue

"If the 20,000 additional American troops being sent to the Iraqi capital focus primarily on Sunni insurgents, there's a chance the Shiite militias might get bolder. . . .

"So what will happen in next six months? Sunnis will become more insecure as their militias are dismantled. Shiite militias will lower their profile on the streets and remain as they are now, ensconced within the Iraqi Army and police. That will surely make Sunnis less likely to support the new Iraq. Shiite political leaders, on the other hand, will be emboldened.

" . . . The greatest danger of Bush's new strategy, then, isn't that it won't work but that it will -- and thereby push the country one step further along the road to all-out civil war. . . . The U.S. Army will be actively aiding and assisting in the largest program of ethnic cleansing since Bosnia. Is that the model Bush wanted for the Middle East?

"In reality it is not true that we cannot just click our heels and get out of Iraq. We can do exactly that. A phased withdrawal of our troops doesn't preclude doing a four to sixth month security operation in Baghdad. If the President and the Iraqi Prime Minister think they can bring some security to the capital then they can take the troops they need to do it from other provinces. We don't need a surge and we don't need to wait to start bringing units home.

"It'd be nice if we could get out the door before the Iraqi government gets strung up with piano wire but, hey, it's not something we want to invest many more lives and billions to avoid.

"When the Russians got whipped in Afghanistan they went home. Then they (and we) watched as warlords destroyed what little remained of the country. We don't have to let that happen in Iraq. We can start negotiating now with the regional players to try to assure that Iraq doesn't become a new Afghanistan. If the President wants some time to get those negotiations started, that's understandable. But he ought to explain himself."

"It was the hugely ambitious project of the Bush administration to transform the entire Middle East by remaking Iraq into an irresistible model of prosperous democracy. Having failed in that worthy purpose, another, more prosaic result has inadvertently been achieved: divide and rule, the classic formula for imperial power on the cheap. The ancient antipathy between Sunni and Shiite has become a dynamic conflict, not just within Iraq but across the Middle East, and key protagonists on each side seek the support of American power.

-- EDWARD LUTTWACK
"I have some questions. When politicians and commentators detail all that the Bush administration did wrong, I wonder whether any of it really matters. Would things have turned out differently if we had done everything right? Was Iraq so "broken" we never could have fixed it? Was Hussein's despotism an avoidable tragedy, or was it, instead, a tragic necessity? I wonder about all these things. I tend to think now we never could have made it work."

has reached advanced societal breakdown, with ethnic cleansing on a regional, neighbourhood and even street-by-street basis. There has been a mass exodus of its professionals and managers, civil servants and entrepreneurs, a haemorrhage of its future. The time for the occupying authorities to have surged was 2003, after the fall of ; like everything they have tried since, this is far too little, much too late. The US deployed a similar number of troops last summer to “lock down” Baghdad, since when the number of killed in the capital alone has rocketed to more than 100 a day, while on average an attack occurs against Anglo-American forces every 10 minutes, and this in a fight now mainly between the minority Sunni deposed from power and the hitherto dispossessed Shia majority drunk with it."

Photograph by The Associated Press
Posted by Shaun Mullen at 6:03 AM
Email ThisBlogThis!Share to TwitterShare to FacebookShare to Pinterest