The (Sad) State of the Union 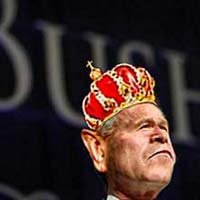 Michael Stickings will be live blogging on President Bush's State of the Union address tonight at The Reaction.

Be there or be square.

Click here for a preview of the president's 7th annual address to Congress, which is expected to focus on domestic stuff and not that big mess youknowwhere.

Which is not surprising because the prez's poll numbers are in the toilet and there is a palpable sense of outrage at how badly he has forked things up.

Although there is the obligatory fear mongering in the form of a timely report that Al Qaeda operatives in Iraq plan to attack the U.S. Check that timely bit. The plan has been known for six months, but somehow was made public on the eve of SOTU.

Meanwhile, Captain Ed suggests over at Captain's Quarters that the presidents may be stealing a page from the Democrats' play book in speechifying on health-care reform (his plan is DOA) and global warming (his plan won't lay a finger on Big Oil).

Who would have thunk it?