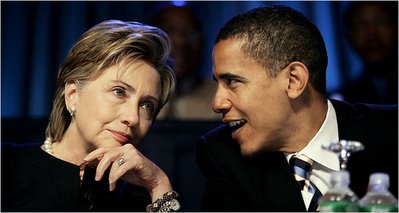 Ed Morrissey at Captain's Quarters on the anticlimactic political announcement of the young year:

"Of course, it wouldn't be Hillary without getting Sillary. She tries for an Oprah-like chatty tone to her announcement, and winds up offering this laughable little nugget:

'I'm not just starting a campaign, though, I'm beginning a conversation with you, with America,' she said. 'Let's talk. Let's chat. The conversation in Washington has been just a little one-sided lately, don't you think?'

"It has? What happened on November 7th, a tea party? Puh-leeze. The Democrats have hardly been silent during Bush's six years in office. They have been shrill, hysterical, and well-covered by the press and bloggers on both sides of the partisan divide. What they haven't been, until the last midterms, is convincing. . . ."

"So in one day we've had Hillary and Sillary. Perhaps we'll soon get Shrillary, who never stays quiet for long."

Yours Truly on the anticlimactic political announcement of the young year:

"About all I can add is that Hillary is not electable. Nor would I vote for her unless she was the lesser of two (or three) evils. She is an overweaning opportunist who stands for whatever standing for will advance her agenda and bring in the most dough.

"Iraq is the major issue of the last five years and Hillary has proven nothing if not that she is adept at talking out of both sides of her mouth while trying to bear hug the political middle.

"I'm not fooled and I predict a whole lot of other people won't be fooled either."

Posted by Shaun Mullen at 1:49 PM
Email ThisBlogThis!Share to TwitterShare to FacebookShare to Pinterest