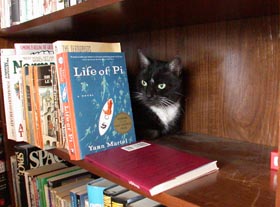 Earlier this month, we reported with great sadness the death of Jasmine, one of the two kitties in blogger Kevin Drum's house that was the inspiration for the Gratuitous Kitty Shot of the Week here at Kiko's House.

"Today we went down to the shelter where we got Inkblot eight years ago and spent some quality time in their visitor room. At first we had no luck. . . . Then, after we'd almost given up, Marian said, 'Let's look at one more.'

"You can see the result . . . No name yet, so we're taking suggestions. She's three years old, makes a beeline for any open lap, and has already established herself as queen of the household. It took Inkblot a while to even figure out that anything had happened, and when he finally came downstairs he let loose with a few pro forma hisses -- which were blithely ignored -- and then retreated upstairs. He's safe there for now, but it won't last. This cat is going to be queen of the entire house before long."

Kevin is soliciting names for the new member of the family and already has gotten a couple hundred suggestions. Incidentally, "The Life of Pi," the book that the kitty is crouched behind, is fabulous and I heartily recommend it. So I would recommend naming it Pi.

Want to make your kitty world famous?
Send us a photo as a .jpg attachment in an email to kikokimba@gmail.com