Domestic Wiretaps: Back to Square One? 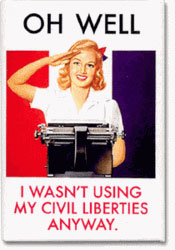 At first -- and second -- glance, the Bush administration's annnouncement that it is disbanding the controversial domestic warrantless surveillance program run by the National Security Agency is a huge victory for that good old rule of law. It may well be, but the decision is far more complex and nuanced than that.

For one thing, the White House faces a string of oversight hearings by the Democratic-controlled Congress, which makes the timing of its rather stunning reverse-field play suspect.

For another, it may make the administration vulnerable in other areas where it said thus and such a program was absolutely vital to protect the homeland even if it did turn establish law on its ear.

What the heck, just read Joe Gandelman's excellent roundup from all sides of the political spectrum over the The Moderate Voice. It tells you all you need to know . . . and more.
Posted by Shaun Mullen at 6:31 AM
Email ThisBlogThis!Share to TwitterShare to FacebookShare to Pinterest