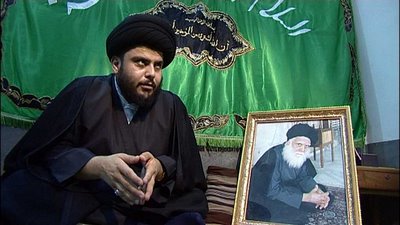 Moqtada Al-Sadr: Part of the solution today, part of the problem tomorrow.
How many times have we heard that there has to be a political solution in Iraq? How many times have we heard that a military solution is not only not possible, but any escalation would only make a very bad situation worse and probably hasten the collapse of a country already teetering on the brink of catastrophe?

I've lost count of how many times I've been confronted with those words of wisdom only to shake my noggin because I know full well that a political solution, which may look swell in the aggregate, is almost as elusive as throwing more guns and bombs at the situation.

And I know full well that the response of the sectarian militias to President Bush's stillborn "surge" strategy will be to fade into the back alleys while sending representatives out to try to defuse the situation, only to take up arms and fight another day.

Which is exactly what is happening.

To the surprise of no one who knows that militia leaders usually are able to stay a step or two ahead of the beleagured governments in Baghdad and Washington, the New York Times reports that an official apparently authorized to speak on behalf of field commanders for Moqtada Al-Sadr's Mahdi Army have approached a ranking Western military official and offered a plan to avoid armed confrontation.

The militia controlled by the virulently anti-American cleric numbers 7,000 or so "troops" in Baghdad alone, and has been on a tear in the year since civil war erupted.

"The official is Rahim al-Daraji, the elected mayor of the Sadr City district, the vast grid in the northeast corner of the capital that is the stronghold of the militia. . . . Mr. Daraji has met twice in the past two weeks with Lt. Gen. Graeme Lamb, a British officer who is the deputy commanding general Iraq.

"During the meetings, which took place on Jan. 17 and, most recently, on Monday, Mr. Daraji laid out a proposal from what he said were all the major political and militia groups in Sadr City, the senior Iraqi official said. The groups were eager to head off a major American military offensive in the district, home to two million Shiites, as the Americans begin a sweeping new effort to retake the streets of Baghdad.

Mr. Daraji said in an interview that field commanders would forbid their foot soldiers to carry guns in public if the American military and the Iraqi government met several basic demands, mostly involving ways to ensure better security for Sadr City."

Here are some problems with this development:

* It is a temporary solution, at best, because it merely seeks to defuse the "surge" strategy, not the entire situation.

* It does not take into account the other half of the situation -- the Sunnis.

* It is not clear that Al-Daraji really is speaking for Al-Sadr.

* Al-Sadr is not in control of rogue elements of his militia.

Onward through the fog.