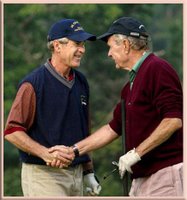 George H.W. Bush, the president's daddy, has been named chairman of the board of the National Constitution Center in Philadelphia.

The center is a terrific place that showcases the grand dame of American documents in some really cool and educational ways, and the selection would seem to make sense.

Hey, not so fast there, says Will Bunch over at Attytood. Wasn't it Bush père who helped subverted the Constitution in the sordid Iran-Contra Affair?

Will says "Just say no" to the Bush appointment.

More here.
Posted by Shaun Mullen at 5:59 AM
Email ThisBlogThis!Share to TwitterShare to FacebookShare to Pinterest