Post-Katrina: Worse Than You Thought 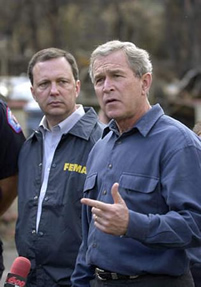 Michael "You're Doing a Heck of a Job Brownie" Brown, the disgraced former FEMA director, says that party politics played a role in decisions over whether to take federal control of Louisiana and other areas affected by Hurricane Katrina

Some in the White House suggested only Louisiana should be federalized because it was run by a Democrat, Gov. Kathleen Blanco, Brown told a group of graduate students at a lecture on politics and emergency management at Metropolitan College of New York.

Brown said he had recommended to President Bush that all 90,000 square miles along the Gulf Coast affected by the hurricane be federalized, making the federal government in charge of all agencies responding to the disaster.

"Unbeknownst to me, certain people in the White House were thinking we had to federalize Louisiana because she's a white, female Democratic governor and we have a chance to rub her nose in it."