Got Them Deployment Blues Again, Mama 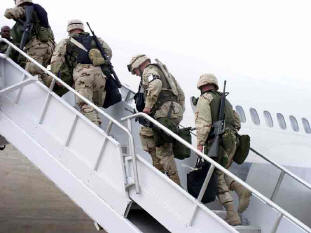 About the time you're reading this -- if you're reading this on Saturday -- the first several thousand of the troops being sent to Iraq as part of President Bush's "surge" strategy will be deploying from Fort Bragg and Camp Lejune in North Carolina.

They include about 5,000 Army paratroopers in 4th Brigade Combat Team of the 82nd Airborne Division at Bragg and about 200 Marines in the headquarters element of the 2nd Marine Logistics Group (Forward) at Lejune.

How long they will be in Iraq is anyone's guess because the Pentagon has been quietly -- and some would say perniciously -- extending tours of duty for some time now, and has accelerated these actions since the "surge" strategy was unveiled.

In one recent instance, the troops themselves heard about their tour extension from loved ones via email back home rather than their commanders.

This is what happened to about 150 New Jersey National Guard troops who had been scheduled to return home in March after having served for a year in Iraq. Their tours of duty have been extended for up to 125 days.

Explains the New York Times in an editorial:

"A day after Mr. Bush announced the troop increase in a televised speech, the National Guard in New Jersey told family members that their relatives would have to stay on. The news quickly made it back to the troops in Iraq through anguished phone calls and e-mail.

"Not until Sunday — four days after Mr. Bush’s speech — were the troops notified by their Army commanders, after Gov. Jon Corzine of New Jersey made two phone calls to Army officials.

"Mr. Corzine, who had learned of the lapse from outraged family members, said that Pentagon officials expressed regret and blamed the delay on a 'breakdown in the chain of command on the ground in Iraq.' The governor rightly called what happened 'unacceptable.'

"But given all that has gone wrong with the misguided American adventure in Iraq, the foul-up is hardly surprising. It’s one more sensitive issue that has been insensitively and unfairly mishandled."

Then there is the question of whether the number of troops being surged is indeed 21,000, as President Bush and the Pentagon have stated, or whether it is higher.

This weighty issue is playing out, among other places, in a food fight between conservative and liberal bloggers.

Greg Djerejian at Belgravia Dispatch goes way deep on the issue in a lengthy post. You might want to have a calculator handy when you read it.
Posted by Shaun Mullen at 6:16 AM
Email ThisBlogThis!Share to TwitterShare to FacebookShare to Pinterest