Update On a Garden State of MInd 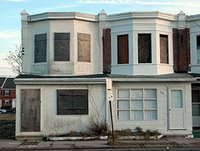 As regular readers know, going after New Jersey (aka "The Garden State") is blood sport at Kiko's House. There is no state more corrupt and nowhere in the state a place where affluence and poverty coexist check to jowl than Atlantic City.

So it came as no shock to read that a state agency created to redirect a small portion of revenues from that city's casinos to blighted areas has shoveled about $400 million back to the casinos themselves.

This represents more than 20 percent of the money the agency has "committed" to trying to pull Atlantic City up by its bootstraps since its inception in 1985.