Wreck of the Mission Accomplished Express 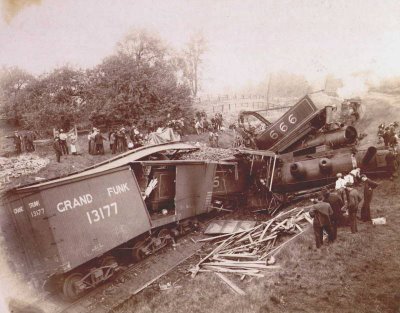 I am not a blogger who has been giddy with blue-state schadenfreude as the presidency of George Walker Bush has begun to come apart.

For one thing, the Democrats are perfectly capable of screwing things up even worse. For another, the White House's serial missteps of the past six years leave Americans vulnerable in ways that are not readily obvious but are pretty freaking diabolical, and I would much rather have the Bush legacy be mediocrity and not disaster.

No matter. We now have the specter (no, not you, Arlen) of Engineer George’s Mission Accomplished Express chuff chuffing ever faster down the track toward a crack up with an oncoming train, the Shit Happens Express. (More about that in a bit.)

Given this scenario, it is interesting in a voyeuristic sort of way to identify the Republicans who:

* Have jumped off the Mission Accomplished Express.

* Are undecided about whether to stay aboard.

* Are puffing on the last of their Jack Abramoff autographed stogies in the club car and show no intention of jumping.

A TRAINWRECK YOU COULD BANK ON

I knew that there was bound to be a train wreck from the moment that George Bush donned his engineer's cap and red paisley bandana after walking away with the 2000 presidential election. I just didn't know when, over what or how bad it would be.

There was just no way that this man with a frat boy smirk -- who had been propped up in everything he had done in life and still managed to pull off some stunning failures -- had the ability to drive the American locomotive into the 21st century. These are complex times and although he does not lack for smarts, Engineer George is a simpleton.

When I factored in Cheney, Rumsfeld, Wolfowitz, Perle and Company, who would be stoking the firebox on the Mission Accomplished Express while George played engineer, the prospect of the coming years was downright terrifying. And that was before the 9/11 attacks.

Nevertheless, I was not prepared for the godawfulness of what has ensued, which is why the train wreck will be of such epic proportions:

* Failing to make good on a single campaign promise of consequence despite a compliant Congress and a post-9/11 mandate comparable to that given FDR after .

* Pledging to reinvigorate the intelligence community to be able to meet the unprecedented challenges of the War on Terror, but instead presiding over a new generation of turf battles that have been led, in many cases, by hacks whose sole qualifications were their ties to the GOP power elite.

* Declaring an unprovoked war on a favorite pre-existing target of the Coal Car Cabal, thereby diverting resources from the real War on Terror and plunging the into a quagmire that has cost nearly $300 billion, taken over 3,000 American lives and tens of thousands of Iraqi lives, and further destabilized the .

* Making a mockery of the separation of powers, fixating on secrecy to the point of obsession, and trying to rob Americans of their most fundamental civil liberties.

* Revealing that "compassionate conservatism" was merely a focus group-tested mantra through giveaways to the wealthy and attacks on the middle class, pandering to the religious right wing, and showing an appalling indifference to human suffering except when it could be used for political gain.

BEWARE THE THIRD RAIL
As columnist Robert Novak notes, “ is a black hole for the Republican Party.” As I note, there is an electrified third rail under the Mission Accomplished Express -- Engineer George's stillborn "surge" strategy. There may be a foretelling of things to come this week when the Senate votes on the first of a number of measures on , a non-binding anti-surge resolution co-sponsored by Republican Chuck Hagel of .

Then there’s the Watergate Precedent.

Dick Polman reminds us at American Debate that there has not been a mass defection of Republicans from a Republican president since 1974 when party faithful were riven by whether to continue supporting Richard Nixon as his impeachment drew closer:

"In the end, a delegation of Republicans, led by senators Barry Goldwater of Arizona and Hugh Scott of Pennsylvania, trekked to Nixon’s office and told him that he had lost his party’s support, that the rank and file – forced to choose between loyalty to him, and loyalty to the ticked off folks back home – had chosen the latter."

Engineer George is not facing impeachment, but guess what? Things are not nearly as simple this time around.

As Jacob Weisberg notes in a Slate essay, the stay on board-or-jump decision is not all that tough to make if you are a congressperson who faces re-election in 2008. People in "safe" districts stay on board. People who face tough re-election battles jump.

But it's a whole other bucket of coal if, like Hagel, you've got your eye on the White House. This is because your decision is predicated on being able to woo the conservative Republican base or be the last man standing after the other candidates fade.

I'll turn it over to Weisberg:

"This explains why the three candidates who face the most conservative skepticism—Sen. John McCain of Arizona, former New York Mayor Rudolph Giuliani, and former Massachusetts Gov. Mitt Romney—have all opted to endorse the surge idea. For McCain, it may be a matter of simple consistency. . . . But the value of support from the Bush-controlled party establishment isn't lost on McCain, either. Romney, who is attempting to be the favorite Mormon son of the party's evangelical base, wants even less daylight between himself and those on Karl Rove's speed dial. Giuliani, for his part, realizes that a Republican moderate cannot also be a Republican maverick.

" . . . There are two conservative presidential hopefuls, Sam Brownback of and Chuck Hagel of , who have come out against Bush's surge. Their political calculus is more complicated still. Both Brownback and Hagel are second-tier candidates with limited national visibility. Their presidential opportunity arises only if those in the first tier falter. Thus, they need to differentiate themselves as strongly as possible.”

'AND THEY ARE PAYING HIM NO MIND'
What makes the decisions facing Republicans more complicated still is that whether the "surge" strategy succeeds or fails is out of Engineer George's hands. Despite some isolated successes in Iraq, the has not been able to effectively leverage its position there since the Golden Mosque in was blown to smithereens a year ago and degenerated into a full-blown civil war that shows no sign of ending.

Which brings us to the Shit Happens Express, the train hurtling down the track from the other direction.

Engineer George is frantically waving his bandana from the cab of the Mission Accomplished Express and leaning hard on the whistle, but the guys at the throttle of that other train include a rogues gallery that includes anti-American Shiite cleric Moqtada Al-Sadr, a grab bag of Iraqi insurgents and 's ayatollahs.

And they are paying him no mind.

Posted by Shaun Mullen at 5:43 AM
Email ThisBlogThis!Share to TwitterShare to FacebookShare to Pinterest

For one thing, the Democrats are perfectly capable of screwing things up even worse.

Really? What Democratic administration fucked up on both foreign and domestic issues as the current crew? Carter trod the earth like a Colossus compared to these twits.

Do you honestly believe a Gore or Kerry administation would have been 1/2 as bad?

nice piece. i agree with everything you write, but i can't help this nagging feeling that this is what they wanted all along. can anyone really be THIS incompetent? I'm not so sure anymore that incompetence is what we're seeing. These are the same folks, after all, who want to dismantle government here at home, and Iraq is what that would like. My point: it's not incompetence. Chaos is the objective, because of the kinds of people it tosses up.