Barbaro: The Horse That Wouldn't Quit 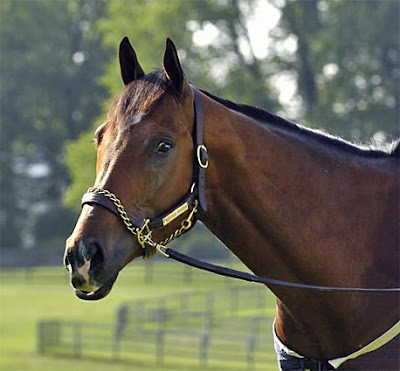 Barbaro, who captured America's heart when he won the 2006 Kentucky Derby and then broke it when he suffered a catastrophic leg injury at the Preakness Stakes, was put down today after making a recovery that had been nothing short of miraculous.

The colt had undergone successful post-race surgery on his right hind leg to insert a titanium plate and screws into three broken bones and the pastern joint, as well as three more follow-up operations. But he had developed a severe case of laminitis, a painful disease caused by uneven weight distribution in the limbs that almost always is life ending.

The three-year-old had been on a death watch for several weeks after the Preakness at The New Bolton Center of the University of Pennsylvania, the world famous veterinary hospital in Southeastern Pennsylvania where he was taken after the accident.

Although Barbaro's shattered leg was healing well, the laminitis had all but destroyed the hoof on his uninjured left hind leg, leaving him with splints on both rear legs and necessitating considerable time in a sling each day.

He took longer to recover from anesthesia after his last recent surgery and had a fever. The end seemed to be near. Having written many a before-the-fact obituary in my newspaper career (for Jacqueline Onassis and Frank Sinatra, among others), I wrote a draft of Barbaro's obituary on the evening of July 1 of last year.

Based on what I was hearing from New Bolton I expected to post it at Kiko's House sooner rather than later. How remarkable that it was later -- so much later.

His sire was Dynamformer and his dam La Ville Rouge, both horses of middling achievement, but he won his first five races by an average seven lengths before winning the Kentucky Derby by 6 1/2 lengths. He was expected to make a run at the Triple Crown, which has been captured by a mere 11 horses in 76 years and was last won by Affirmed in 1978.

After an initial false start at the Preakness on May 20 of last year, Barbaro broke well from the No. 6 position at the starting gate and was up to speed when jockey Edgar Prado heard a sickening pop and his mount stumbled badly. It is likely that Barbaro would have had to been destroyed had Prado not expertly brought him to a halt.

The winner, Bernardini, crossed the finish line almost unnoticed, while Jazil won the Belmont Stakes, the third leg of the crown.

Barbaro underwent five hours of surgery at New Bolton the day after the Preakness.

Chief surgeon Dr. Dean Richardson said at the time that Barbaro's chances of survival were 50-50. He later improved those odds to 51-49, but never pretended that the long-term prognosis was rosy.

To use my favorite horse analogy, thoroughbreds are creatures with 1,200 pound bodies atop ballerina's legs.

Knowing a thing or two about horse flesh, I was well aware that while Barbaro's recupperation seemed to be going well, his survival still was a long shot because of the possibility of complications like laminitis, which typically appears six to eight weeks after an injury like Barabo's, and in his case did exactly that.

The most famous victim of laminitis was Secretariat, the 1973 Triple Crown winner, who had to be euthanized in 1989.

The extreme and extremely expensive efforts to save Barbaro were not typical, and there has been criticism over the lavish news coverage from people who thought the media should be more focused on news -- all bad, of course -- in the U.S. and abroad. Fair enough.

There also are people who say that thoroughbreds are rushed into racing and that the typical training regimen is too much for barely developed three year olds. I cannot disagree.

Roy and Gretchen Jackson, who bred and owned the colt and are former neighbors of mine, vowed to keep Barbaro alive so long as he had a chance of living a comfortable life at pasture.

Despite Barbaro's will to live, it had become obvious that was no longer possible, prompting me to rev up my obit machine. And then miracle of miracles, his fever broke, his left hoof began to regrow, there is no sign of infection and he apparently was well on his way to recovery when he left New Bolton.

But the complications that had dogged his recovery returned and he had to be euthanized.

Still, Barbaro was indeed the horse who wouldn't quit.
Posted by Shaun Mullen at 1:38 PM
Email ThisBlogThis!Share to TwitterShare to FacebookShare to Pinterest

Sad, all those months and he still had to be destroyed. Not to be cynical but it gave them time to milk his sperm, it wasn't for the horse's benefit.

Considering all the publicity and the prayers and encouragement of well wishers, the question of whether he was "milked" is cynical but appropriate.

Like I say in my tribute, I kind of know Barbaro's owners, and it is more likely that he was gelded at some point in the belief that it would make him calmer during his recovery.

In any event, I'll try to find out.

Excuse me? Milk it?? For what purpose??? You can't possibly know anything about Thoroughbred breeding!!!! I can't believe I'm replying to this nonsense, but it's SO outrageous!

The question is NOT "appropriate"!! What in the world?!? And it's not cynical, it's completely off the rails!! You might "kind of know the owners " but you don't even kinda know anything about thoroughbred breeding!! I hope you really did try to find out, and found out how silly people can be. I'm don't mean to be unkind to you, but this is the kind of reckless stuff that keeps giving racing that horrible greedy slant. You know, "All they care about is the money and their horses are abused and then tossed aside when they can't race anymore." BLAH, BLAH, BLAH...