Iran & Diplomacy At Point of Gun 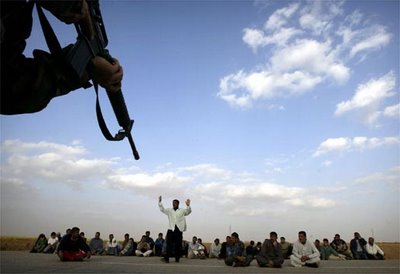 It seems like deja vu all over again: The Bush administration claims that it is not trying to pick a fight with a Middle Eastern country with a significant oil industry that it claims has nuclear ambitions and harbors terrorists.

This time, of course, it's Iran.

Color me naïve, but I cannot believe that the White House would be so stupid as to provoke a war with Iran when it is neck deep in one next door that is an ongoing disaster and it seems like the region is one ill-tossed match away from a conflagration.

But I have to wonder given recent developments, including a warning to Iran by the president on Friday that it must halt "killing our soldiers" and stop its nuclear program coupled with an inane statement by the leading Iran specialist in the State Department that Washington was committed to "a diplomatic path." It, of course, is committed to no such thing.

"Some see an attempt [by the administration] to create a diversion, focusing the country’s attention away from a war gone bad in Iraq, and toward a country that has exploited America’s troubles to expand its influence. Others suspect an effort to shift the blame for the spiraling chaos in Iraq, as a steady flow of officials, from the CIA director to the new secretary of defense, cite intelligence that Iranians are smuggling into Iraq sophisticated explosive devices and detailed plans to wipe out Sunni neighborhoods. So far, they have disclosed no evidence. Next week, American military officials are expected to make their most comprehensive case — based on materials seized in recent raids — that Iran’s elite Quds force is behind many of the most lethal attacks.

"But as they present their evidence, some Bush administration officials concede they are confronting the bitter legacy of their prewar distortions of the intelligence in Iraq. When speaking under the condition of anonymity, they say the administration’s credibility has been deeply damaged, which would cast doubt on any attempt by Mr. Bush, for example, to back up his claim that Iran’s uranium enrichment program is intended for bomb production."

The administration's tactic is what is known as "coercive diplomacy," which Jeb Koogler, a new co-blogger at The Moderate Voice, sums up nicely at his Foreign Policy Watch as "the threat of force to achieve political goals."

Jeb notes that such "diplomacy" can be effective and Iran has indicated it might change some of its more bellicose policies so that it does not end up being another Iraq. I must have been doing laundry or something and missed that development, but Jeff does know what he's talking about.

That is reinforced by his caveat:

" . . . while coercive diplomacy may sometimes prove effective in the short term, it undermines the possibility of peace in the long run. Relying on threats and unilateral military posturing to achieve one's political goals, as we are currently doing with regards to Iran, discourages international cooperation and downplays the importance of genuine diplomacy."

Amen, Brother Jeb.
Posted by Shaun Mullen at 5:39 AM
Email ThisBlogThis!Share to TwitterShare to FacebookShare to Pinterest