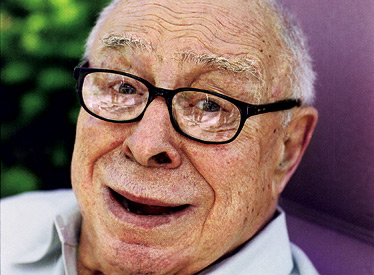 The inimitably funny Art Buchwald died on Wednesday. He asked that the following column be distributed after his death.


Buchwald wrote the column in February 2006 after deciding to check into a hospice, suffering from kidney failure. He had discontinued dialysis and also had one of his legs amputated below the knee. He subsequently was released from the hospice, wrote a book about his experience and also resumed writing his syndicated newspaper column. Pretty amazing, eh?

As he slipped into unsciousness on his death bed, surrounded by family members, he expressed one final hope: that Cuban dictator Fidel Castro not die on the same day as he did.

Several of my friends have persuaded me to write this final column, which is something they claim I shouldn't leave without doing.

There comes a time when you start adding up all the pluses and minuses of your life. In my case I'd like to add up all the great tennis games I played and all of the great players I overcame with my now famous "lob." I will always believe that my tennis game was one of the greatest of all time. Even Kay Graham, who couldn't stand being on the other side of the net from me, in the end forgave me.

I can't cover all the subjects I want to in one final column, but I would just like to say what a great pleasure it has been knowing all of you and being a part of your lives. Each of you has, in your own way, contributed to my life.

Now, to get down to the business at hand, I have had many choices concerning how I wanted to go. Most of them are very civilized, particularly hospice care. A hospice makes it very easy for you when you decide to go.

What's interesting is that everybody has his or her own opinion as to how you should go out. All my loved ones became very upset because they thought I should brave it out -- which meant more dialysis.

But here is the most important thing: This has been my decision. And it's a healthy one.

The person who was the most supportive at the end was my doctor, Mike Newman. Members of my family, while they didn't want me to go, were supportive, too.

But I'm putting it down on paper, so there should be no question the decision was mine.

I chose to spend my final days in a hospice because it sounded like the most painless way to go, and you don't have to take a lot of stuff with you.

For some reason my mind keeps turning to food. I know I have not eaten all the eclairs I always wanted. In recent months, I have found it hard to go past the Cheesecake Factory without at least having one profiterole and a banana split.

I know it's a rather silly thing at this stage of the game to spend so much time on food. But then again, as life went on and there were fewer and fewer things I could eat, I am now punishing myself for having passed up so many good things earlier in the trip.

I think of a song lyric, "What's it all about, Alfie?" I don't know how well I've done while I was here, but I'd like to think some of my printed works will persevere -- at least for three years.

I know it's very egocentric to believe that someone is put on Earth for a reason. In my case, I like to think I was. And after this column appears in the paper following my passing, I would like to think it will either wind up on a cereal box top or be repeated every Thanksgiving Day.

So, "What's it all about, Alfie?" is my way of saying goodbye.

Posted by Shaun Mullen at 10:32 AM
Email ThisBlogThis!Share to TwitterShare to FacebookShare to Pinterest