Excerpts du Jour on the War 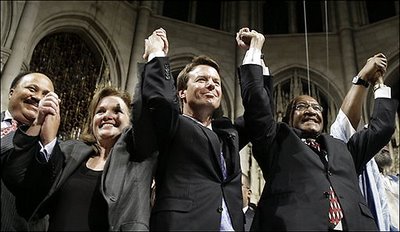 MLK III, his wife, John Edwards and Riverside Pastor James Forbes
I am not a big fan of John Edwards, a decent man but not presidential timber. But just as I excerpted portions of Dr. Martin Luther King Jr.'s anti-Vietnam war speech 40 years ago at Riverside Church in New York City, it is worth sharing Edwards' thoughts from the same pulpit on Sunday.

As [Dr. King] put it then, there comes a time when silence is a betrayal -- not only of one’s personal convictions, or even of one’s country alone, but also of our deeper obligations to one another and to the brotherhood of man.

That’s the thing I find the most important about the sermon Dr. King delivered here that day. He did not direct his demands to the government of the United States, which was escalating the war. He issued a direct appeal to the people of the United States, calling on us to break our own silence, and to take responsibility for bringing about what he called a revolution of values.

A revolution whose starting point is personal responsibility, of course, but whose animating force is the belief that we cannot stand idly by and wait for others to right the wrongs of the world.

And this, in my view, is at the heart of what we should remember and celebrate on this day. This is the dream we must commit ourselves to realizing.

* * * * *
Escalation is not the answer, and our generals will be the first to tell you so. The answer is for the Iraqi people and others in the region to take responsibility for rebuilding their own country. If we want them to take responsibility, we need to show them that we are serious about leaving – and the best way to do that is actually to start leaving and immediately withdraw 40-50,000 troops.

That is why I have spoken out against the McCain Doctrine of escalation. That's why Congress must step up and stop the president from putting more troops in harm's way.

If you’re in Congress and you know this war is going in the wrong direction, it is no longer enough to study your options and keep your own counsel.

Silence is betrayal. Speak out, and stop this escalation now. You have the power to prohibit the president from spending any money to escalate the war – use it.

And to all of you here today – and the millions like us around the country who know this escalation is wrong – your job is to reject the easy way of apathy and choose instead the hard course of action.

Silence is betrayal. Speak out. Tell your elected leaders to block this misguided plan that is destined to cost more lives and further damage America’s ability to lead. And tell them also, that the reward of courage . . . is trust.