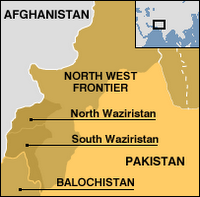 Bill Roggio has been well out ahead of most of the mainstream media on developments in the mountainous border region shared by Afghanistan and Pakistan.

On the Pakistan side, this includes North and South Waziristan . On the Afghanistan side, it includes such garden spots as Tora Bora, which is where the U.S. had Osama bin Laden cornered, but . . . Well, you know the story.

Anyhow, as noted in the previous post, Daniel Pearl's Forgotten War, recent news from the region is very bad.

Roggio reports today at his The Third Rail blog:

"The Pakistani government continues to lose control over the tribal regions bordering Afghanistan. The Taliban and al-Qaeda have attacked a Pakistani military convoy with a suicide car bomb near Mir Ali in North Waziristan. Four Pakistani soldiers and a woman were killed and twenty soldiers were wounded after the suicide bomber rammed the military convoy at the Khajori checkpoint, just east of Mir Ali, a Taliban stronghold."

And this from Barnett Rubin, Director of Studies at New York University's Center on International Cooperation, at The Blotter:

More here.
Posted by Shaun Mullen at 5:24 AM
Email ThisBlogThis!Share to TwitterShare to FacebookShare to Pinterest