'The Consequences of Massive Failure' 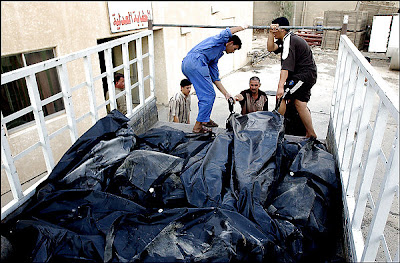 In yet another important report that the White House will ignore, the for Middle East Policy at the Brookings Institution has made public a 140-page analysis titled "Things Fall Apart: Containing the Spillover from an Iraqi Civil War."

Co-authors Daniel Byman and Kenneth Pollack are, for want of a better term, in a scholarly panic as the opening paragraphs of the report's preface made clear:

With each passing day, sinks deeper into the abyss of civil war. The history of such wars is that they are disastrous for all involved. Asking who won most civil wars is a bit like asking who "won" the earthquake. Unfortunately, we may soon be forced to confront how best we can avoid "losing" an Iraqi civil war.

Starting to answer that question is the purpose of this study. We hope that the leaders of the and will find a way to stop what seems to be an irrevocable slide into all-out civil war. Given their repeated failures to do so, and how badly the situation had deteriorated by the time this report went to press, however, we believe that the and its allies must begin thinking about how to deal with the consequences of massive failure in ."

Marc Shulman has posted the entire preface at American Future, as well as a link to the report.