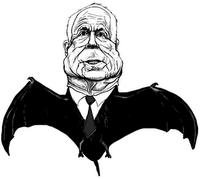 I'm a sucker for Top 10 and Top 20 and Top 50 lists, and so on, especially when they're naughtier than nice.

So I read with pleasure and dread The Beast's 50 Most Loathsome People in America, 2006 list.

Spoiler Warning: You're on the list, and so is John McCain, among 48 other people to hate.

"The most consistently mischaracterized politician in the country, even McCain’s most nakedly self-serving machinations are universally hailed as the bold moves of an independent maverick who really, really, like, cares, man. By virtue of his five-year stay at the Hanoi Hilton and a completely ineffectual campaign finance reform bill (which was itself only PR damage control for his long-forgotten role in the Keating Five), McCain has so successfully snowed America the he could go around kicking puppies all day and he’d be applauded for his authenticity. In reality, McCain is as phony as slimeballs come, having reversed his positions on Roe v. Wade, Bush’s tax cuts, the gay marriage amendment and Jerry Falwell in the last year alone, while the mainstream press looked away and whistled nonchalantly. Keeps changing the number of additional troops he thinks should be sent to , in hopes of extending the disaster beyond the next presidential election, so his decorated veteran status will still be relevant."

Hat tip to Josh Marshall at Talking Points Memo
Posted by Shaun Mullen at 1:43 PM
Email ThisBlogThis!Share to TwitterShare to FacebookShare to Pinterest