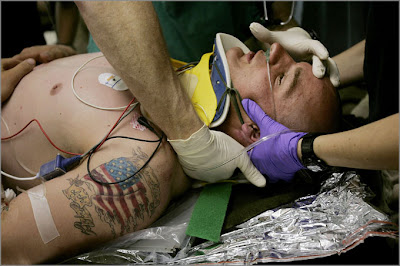 To say that militarily strong states are feeble because they cannot easily bring order to minor states is like saying that a pneumatic hammer is weak because it is not suitable for drilling decayed teeth.

With General Petraeus and Ambassador Crocker set to testify before Congress next week and President Bush planning to deliver his own progress report on the war, here are five things you should know about these hugely anticipated events:

This entire exercise is a cover-up for a White House-manufactured catastrophe of epic proportions and an exercise in finding excuses for staying the course without further alienating voters.

As former Secretary of State Madeleine Albright puts it:

"In Iraq, the list of missions that were tried on but didn't fit includes: protection from weapons of mass destruction, creating a model democracy in the Arab world, punishing those responsible for the Sept. 11 attacks and stopping terrorists from catching the next plane to New York. . . .

"A cynic might suggest that the military's real mission is to enable President Bush to continue denying that his invasion has evolved into disaster. A less jaded view might identify three goals: to prevent from becoming a haven for al-Qaeda, a client state of or a spark that inflames regionwide war. These goals respond not to dangers that prompted the invasion but to those that resulted from it."

(2.) A GOVERNMENT IN COLLAPSE

As no less an authority than General Petraeus himself has noted, there cannot be a military solution in without a political solution.

You can bet that he and Crocker will soft soap the bitter truth that American troops are risking their lives not just to deal with problems that Bush and his helpmates in Congress created, but to prop up a profoundly inept Iraqi government as well as keep the lid on a seething cauldron of a country where only the Kurds are more or less united, the Sunnis are the victims of extensive ethnic cleansing tacitly approved by the prime minister himself, and the dominant Shiites are fighting among themselves over who gets the best crack at the post-occupation spoils.

Jalal Talabani's emergency summit last month produced a political coalition that is a bad joke, although Crocker will doubtless point to it as a sign of progress. As it is, the coalition is nothing more than a sectarian four-party bloc with Sunnis being conspicuous in their absence.

Kenneth Katzman, the author of a Congressional Research Service report, says that:

"My assessment is that because of the number and breadth of parties boycotting the cabinet, the Iraqi government is in essential collapse. That argues against any real prospects for political reconciliation. I would even question the military progress."

A majority of Americans tell pollsters that they won’t believe Petraeus and Crocker no matter what they say. That noted, it's a safe bet that they will avoid painting too rosy a picture, so the real question becomes how much they will exaggerate.

The goal posts have been moved so many times in Iraq that what constitutes progress four and a half years into the war is a far cry from what it would have been not that long ago. In football parlance, this means that what in reality is fourth down and long with time running out has magically become first and goal with plenty of time on the clock.

"Petraeus has been very shrewd about providing dog-and-pony shows to as many analysts, pundits, reporters, and members of Congress as he could cram into the military jets criss-crossing the to on a seemingly daily basis this summer. And those dog-and-pony shows don't seem to have been subtle: rather, they've been hard-sell propositions complete with ‘classified’ PowerPoint presentations (always a winner for people with more ego than common sense); visits to a handpicked selection of the most successful reconstruction teams in the country; a plainly deceptive implication that the surge played a role in the Anbar Awakening; feel-good stories about how local power generation is a good thing; the recent insistence that civilian casualties are down, which increasingly looks like a book-cooking scam that wouldn't stand the light of day if Petraeus allowed independent agencies access to his data; and, of course, the ongoing campaign to scare everyone by kinda sorta claiming that Iran and al-Qaeda are ramping up their activities and then getting suddenly slippery whenever anyone asks if they have any real evidence for this."

Benchmarks are easy things for Americans to get their hands around but have little connection to what’s really going on.

Marc Lynch says at Abu Aardvark that Sunni groups already are planning for a post-U.S :

"They [have] a deep belief that they are the ones who defeated the (and they do believe that they are winning), and that they are a majority in . . . They also believe that the current Iraqi state and government are thoroughly controlled by , and that the Shia are determined to ethnically cleanse them from (at least) . I would guess that a serious insurgency political program would demand not just an end to ethnic cleansing but the return to the status quo ante - i.e. all the Sunni refugees and internally displaced persons returning to their homes (just try to imagine the security implications of such a restoration, under conditions of deep mutual distrust, recent history of reciprocal mass killing, and a heavily armed population). It would probably also demand more than just a seat at a Shia-dominated table - the idea popular with surge-enthusiasts that getting more Sunnis jobs with the police will give them a stake in what they see as a Shia-dominated system badly misreads their worldview. Do you see why the benchmarks so popular in American discussions of -- even if they were being met -- are so irrelevant to the real issues in play?"

Measuring the success of the surge by statistical comparisons is a fool's mission because there are no reliable statistics. The military actively conceals some statistics while touting others, while the Baghdad government has worked hard at keeping journalists from coroners and other sources who are able to speak to the civilian death toll with any certainty. Had it only worked as hard at sectarian reconciliation.

Petraeus will point to the Anbar Awakening as the way ahead in Iraq, but that has been the most over hyped development since New Coke. It is richly ironic that Bush's photo op with Sunni sheiks on Monday took place at a remote air base that is about as far from the once-safe Green Zone the president could get without being in . . . gadzooks! Syria.

The sheiks whom the president glad handed were trying to kill Americans (as well as Al Qaeda insurgents) a few short months ago. The reality is that the long term success of this "hedging our bets" strategy is dependent on a continuing flow of arms and money, and there is no guarantee that this "success" can be replicated elsewhere in .

The surge was supposed to calm , but the neighborhoods that are now more peaceful have been ethnically cleansed, so it is difficult to attribute "progress" to an increased U.S. troop presence. Much of the violence once endemic in the capital has merely shifted elsewhere and Iraqis continue to be driven from their homes in many areas, while it cannot be emphasized enough that White House propagandizing aside, Al Qaeda is responsible for a very small percentage of all insurgent attacks.

The state of the surge should come as no surprise. A mere 30,000 additional troops were not going to accomplish much more than keep the lid on, and Petraeus said as recently as yesterday that what gains there have been could be easily reversed.

"The military offensive has temporarily suppressed, or in many cases dislocated, armed groups. Once the military surge peters out, which it will if there is no progress on the political front, these groups will pop right back up and start going at each other's, and civilians', throats again."

"I don’t know if American casualties are down. I surely hope they are. I don’t know if civilian casualties have dropped significantly. Looking at the big picture, it hardly matters. Iraqis are still being found in the streets of with holes drilled through their heads or worse, no heads at all. And Iraqi families are still hearing knocks on the door in the middle of the night telling them they have 15 minutes to pack up and leave as the de facto partition of the country into Sunni, Shia, and Kurdish enclaves continues apace – surge or no surge."

THE SUM-UP
A progress report implies that there has been progress, and there indeed has been some in Iraq. But it is far too little and far too late to make a difference, let alone paper over the serial blunders made by an arrogant administration that has not even begun to come to terms with what I described here as the great foreign policy disaster in American history.

The U.S. broke Iraq. It cannot fix it on its own and there has been no progress in the political arena toward reconciliation, while not a single piece of the major legislation that the White House had expected the Iraqi parliament to pass into law -- not one -- has been approved.

Furthermore -- and this is no small matter -- the U.S. will run out of deployable troops sometime next year although the keenest minds are saying that an American commitment will have to stretch into the foreseeable future if the war ends in anything less than a catastrophe.

Take Stephen Biddle, a military analyst at the Council on Foreign Relations. Biddle is a proponent of the so-called patchwork-quilt strategy in which alliances and cease-fires would form the basis of a "bottom up" approach to nation-building. The goal of the strategy is for one region of Iraq after another to become secure enough that there eventually could be a loose but sustainable national confederation.

What does Biddle believe it would take for this strategy to succeed?

Biddle surely knows that this plan is DOA if, for no other reason, because of stateside political realities.

A real progress report would explain how the hell and when the U.S. is going to extricate itself from Iraq.

But don't expect David Petraeus or Ryan Crocker, let alone George Bush, to look forward when their primary motivation is to win time and score political points by looking back.

Photograph by Chris Hondros/Getty Images
Posted by Shaun Mullen at 6:06 AM
Email ThisBlogThis!Share to TwitterShare to FacebookShare to Pinterest