Yet Another Hall of Closet Pols Inductee 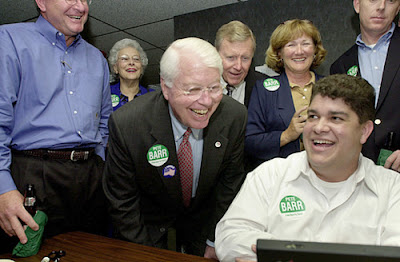 When police responding to a call from a worried friend arrived at the Hickory Cove residence of Ralph Gonzalez in central on August 23, they found dead the prominent Republican consultant, his roommate David Abrami and Jason Robert Drake, a mutual friend.

They called the deaths a double murder-suicide, identifying Drake as the shooter, and one newspaper with inside information initially labeled the incident a "lovers' fight" stemming from a gay love triangle before deleting the reference.

Gonzalez is said to have come out to a few of his closest friends but otherwise kept his sexual orientation secret, which would make him a posthumous inductee into the GOP Hall of Closeted Pols, where he join's a Who's Who of closeted gays in a political party that officially loathes them.

The consultant was the former head of the Republican Party in and president of Strategum Group, an political-consulting firm that represents Republican candidates. He managed Florida U.S. Representative Tom Feeney's 2002 campaign and the unsuccessful 2003 mayoral campaign of advertising executive Pete Barr.

Among Gonzalez' clients was the Alabama Republican Legislative Committee, for whom he produced an anti-gay flier accusing a Democratic candidate of supporting gay marriage. He also had close ties to onetime GOP right-wing Christianist wunderkind Ralph Reed and Congressman Patrick McHenry, a North Carolina Republican.