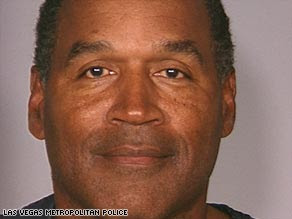 In a society that judges a person by the color of their skin, Orenthal James Simpson had something that few well-known black Americans can claim:

He was so accomplished and at one time was so popular that, in advertising agency parlance, he was "race neutral."

That is to say that when most people looked at him they saw not a black man who happened to have overcome a disadvantaged childhood in a broken home, but a handsome and gifted athlete who had found fame and fortune by parlaying outstanding college and professional football careers into a successful career off of the field selling everything from men’s footwear to rental cars, and later as a not-bad Hollywood actor. Who just happened to be black.

When NFL quarterback Michael Vick was arrested last month and pleaded guilty to felony charges related to dog fighting and gambling, much of the reaction broke down along racial lines. And although Simpson’s acquittal on charges that he murdered his wife, Nicole, and Ron Goldman in his storied 1995 criminal trial can be attributed, in large part, to black jurors who believed that he had been framed because of his skin color, it appears that to most people O.J. still remains O.J., not merely a black man with a lengthening rap sheet.

Simpson was arrested and is being held without bail on robbery, assault and burglary charges after an alleged sports-memorabilia heist at the Palace Station Hotel & Casino in Las Vegas last Thursday.

The men are accused of taking sports memorabilia from two men in a home invasion-type robbery involving several companions, two of whom pointed guns at people in the room.

One alleged victim, Alfred Beardsley, has been quoted by celebrity Web site TMZ.com as saying that Simpson later apologized to him and told him he regretted the incident.

Simpson has said that he entered the room with a group of friends, one of whom was posing as a potential buyer, after being tipped off that some of his personal items were for sale there. He said his friends helped him carry the items from the room, but said no guns were involved, and that the incident was not a robbery.

But Police Lieutenant Clint Nichols said interviews and searches -- including the seizure of two guns during the investigation -- undercut Simpson's story and they believe he was the ringleader:

"We don't believe anybody was roughed up, but there were firearms involved in the commission of the robbery."

Not coincidentally, Simpson's stock-in-trade since the murders has been selling his sports memorabilia collection, including his Heisman Trophy, in order to maintain his lifestyle (golf by day, party by night) and keep creditors off of his back. The trophy sold for $255,500 in 2006 and is expected to appreciate in value.


It is, I suppose, a testament to Simpson's power of personality that his latest travails do not seem to have created yet another racial flash point.

Although I covered the murders, criminal trial and subsequent civil trial in which the families of Nicole Brown Simpson and Ron Goldman were awarded a $33.5 million wrongful-death civil judgment, I claim no special insight into the demons that possess the Hall of Famer.

All I know is that despite his accomplishments and exalted status he was just another human being vulnerable to the temptations and frailties – in his case outbursts of rage, jealousy and at least at one time a fondness for illegal substances -- that bedevil all of us.