Baseball Playoffs & Spitting Out the Bit 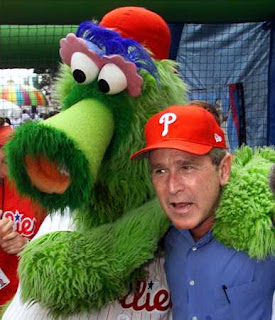 I'm going to be fricking unsufferable over the next three days because my Philadelphia Phillies -- tied for first place in the National League East -- are thisclose to winning the division crown or NL Wild Card.

I would prefer the former but would take the latter.

That's what happens when you're a long suffering fan of the team that has lost the most games in Major League Baseball history and secretly fear that the Phillies will find another way to blow it between tonight and Sunday.

I reprised the Phil's legendary 1964 pennant drive collapse the other day, but according to baseball wonk Nate Silver, the all-time greatest collapse belongs to the 1995 California Angels.

Meanwhile, there are more bizarre end-of-season permutations looming on the horizon than ever, including what would happen if the Phils, New York Mets, Colorado Rockies, Arizona Diamondbacks and San Diego Padres all end with identical records.

More here on that.
Posted by Shaun Mullen at 4:39 AM
Email ThisBlogThis!Share to TwitterShare to FacebookShare to Pinterest