The Boss: 'This Is a Song About Things That Shouldn't Happen Here Happening Here' 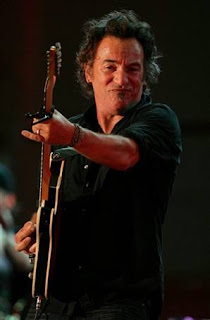 Bruce Springsteen and his E Street Band have been making the rounds as they prepared to embark on a world tour last night in support of “Magic,” their new album.

Springsteen opened several rehearsals (see photo) to the public earlier in the week, gave a wide-ranging interview to The New York Times and appeared yesterday morning on the Today show.

Now I am fortunate enough to have seen The Boss starting way back in 1973 in small club appearances and a goodly number of times over the years until I soured on big venues. My affection for him is unbounded because of his songwriting, nonpareil heartland rock, affection for and fearless defense of progressive politics.

Here is his intro to one of the two songs he played on the Today show:

"This is a song called “Livin' In the Future.” But it's really about what's happening now. Right now. It's kind of about how the things we love about , cheeseburgers, French fries, the Yankees battlin' the Bill of Rights [holds up microphone, urging crowd to cheer] . . . V-twin motorcycles . . . Tim Russert's haircut, trans-fats and the Jersey Shore . . . We love those things the way womenfolk love Matt Lauer.

"But over the past six years we've had to add to the American picture: rendition, illegal wiretapping, voter suppression, no habeas corpus, the neglect of that great city and its people, an attack on the Constitution. And the loss of our best men and women in a tragic war.

"This is a song about things that shouldn't happen here happening here."

Hey, I even know the fotog: Mel Evans of The Associated Press

Posted by Shaun Mullen at 5:04 AM
Email ThisBlogThis!Share to TwitterShare to FacebookShare to Pinterest