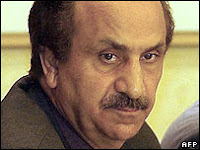 Did Blackwater operatives help a former Iraqi cabinet minister being held on embezzlement charges escape from a Green Zone jail?

In the wake of the shooting deaths of at least eight Iraqis by Blackwater bodyguards last weekend, Prime Minister Nouri al-Maliki claimed that the North Carolina-based security company has been involved in at least seven serious incidents, some of which resulted in the deaths of innocent civilians.

Samarrai (photo) had been awaiting sentencing on charges that he had embezzled $2.5 billion that was intended to rebuild 's decrepit electricity grid.

Meanwhile, Erik Prince, the former Navy SEAL who heads Blackwater, has been called on the carpet by Representative Henry "Mr. Investigation" Waxman, who has been told to appear before the House Government Reform Committee next week to talk about Blackwater's activities in Iraq and Afghanistan.
Posted by Shaun Mullen at 4:20 AM
Email ThisBlogThis!Share to TwitterShare to FacebookShare to Pinterest