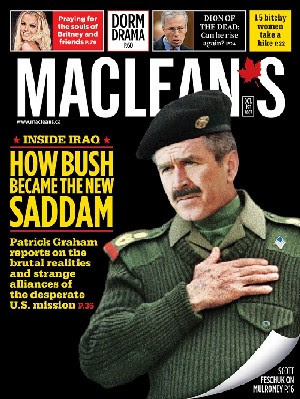 Correspondent Patrick Graham does note that the U.S. has reached out to Saddam Hussein's former henchmen, but that certainly does not make him "the new Saddam" as hyped on the cover of the new Maclean's magazine.

That so noted, Graham's commentary is most excellent for its perspective, depth and balance. Some excerpts:

ertainly the notion of there being any cohesive central power in is a myth. Whatever is running the country, it’s not a government. ’s body politic has some kind of autoimmune deficiency syndrome in which the antibodies designed to defend it have turned on its own organs. It’s a perfect environment for opportunistic parasites, in this case ’s neighbours. So it seems almost unfair to criticize Prime Minister Nouri al-Maliki’s failure to govern, as if somehow he was in charge of anything that could be called a state.

In many ways, this is Saddam’s fault. Like most tyrants, he turned the Iraqi government into a series of fiefdoms loyal only to him. That’s why it was called a regime. But today, it’s really a set of regimes.

Revenge is deeply woven into the foundations of this war, and not just on the Iraqi side. I remember looking inside the lead Humvee coming into downtown on the day the Americans took the city on April 2003. Inside was an "I Love NY" sticker. How much of the American motivation for the war was payback for 9/11 is a question that can be asked every time Bush is quoted, as he was recently in , saying "we’re kicking ass." Misplaced payback, perhaps, but revenge is rarely rational.

The real question is, what are s objectives in , and how will Iraqis react? If wants economic, political and military domination, the problems are long-term. If is in to fight a proxy war against the , then presumably it will leave when the does. In general, I have found Iraqis to be extremely suspicious of the Iranian government and its involvement in their country—not just the Sunnis, but the Shias and Kurds as well. But then again, even Iranians are suspicious of their own government.

has a number of interests in that go beyond security. The most obvious is religious— contains some of the holiest sites of Shia Islam that have been cut off from Iranian pilgrims for decades. The other is economic. With a population of over 65 million people, views itself as a regional superpower and expects the financial rewards that come from that position. And like any other superpower, it creates economic problems for its neighbours. When I was in in August, people complained that Iraqi farm produce was being driven off of the market by , which is dumping its fruit and vegetables in . This is a disaster for Iraqi agriculture, one of the few areas of employment in the country.

America's other main enemy is al-Qaeda in Iraq, which is to Osama bin Laden’s al-Qaeda what a cheap watch is to a Swiss timepiece—effective, easily reproduced, and disposable. Al-Qaeda did not exist in before the invasion, but today it, along with , are the two strongest arguments the makes for "staying the course." Al-Qaeda in is essentially a religious criminal gang that kills anyone who threatens its power or differs from its Salafist views on establishing a perverse form of an Islamic state. . . .

The American role in the promotion of the terrorist organization is not some mad conspiracy theory, but a well-documented attempt by the government to demonize the insurgency and make it appear to be the central front in the war on terror. This was as great a mistake as disbanding the Iraqi army, which the U.S. did in May 2003, or perhaps even greater, since it led to the sectarian downward spiral that has destroyed the country.

[R]ather than come up with an intelligent counter-insurgency policy, reach out to traditional tribal social structures and try to understand why American soldiers were getting killed, military leaders did what Americans have gotten very good at doing in the last few years. They made up a story, which they repeated on the news for domestic consumption—and then started to believe themselves.

An enduring myth about is that it can be split into "nation" states based on ethnicity or sectarian differences, with a Shia south, a Sunni middle and a Kurdish north. But Arab Iraqis are far more nationalistic than you would guess from all the discussions of "ethno-sectarian" differences. Indeed, many Iraqis are astonished by the sudden emergence of Sunni and Shia divisions. As one Iraqi American said to me: "We never used to talk about it, but the other day a stripper asked me if I was Sunni or Shia." And that was in .

It’s true that many Kurds are keen on partitioning , but they are also keen on taking chunks of , and to make a Kurdish homeland. And at least some members of one Shia party, the Supreme Islamic Iraqi Council, promote a very decentralized federalism. But, for the most part, the vast majority of Arab Iraqis see as a strongly unified state. Shias and Sunnis may be chauvinists, violently so in some cases, but that doesn’t mean they don't see as a nation.

The discussion in and has always drowned out the reality of . One of the terrifying aspects of the war is the monumental failure of analysis and action on the part of ’s political, military, journalistic and even business elites.

That problem may be systemic—the result of a "fact-based" confronting a society it did not understand and simply making up an alternate reality, guns ablaze. So far, the Republicans have done an impressive job at failing in . Soon it may be the Democrats’ turn to fail, albeit in a different way. It’s a shame because Iraqi political parties are perfectly capable of doing that on their own. Indeed, they seem to be going out of their way to compete with the Americans on that score.

Posted by Shaun Mullen at 5:56 AM
Email ThisBlogThis!Share to TwitterShare to FacebookShare to Pinterest

Anonymous said...
This comment has been removed by a blog administrator.
3:02 PM

Allah or Ally?
.
The story's told that once upon a time George Bush, Rummy and Darth Vader happened to visit a Mosque at evening prayers.
Rummy turns to Cheney and says, "Why does the President seem so happy?"
Cheney faintly lights up his malicious leer and says, "He thinks they're repeating ally, ..ally."