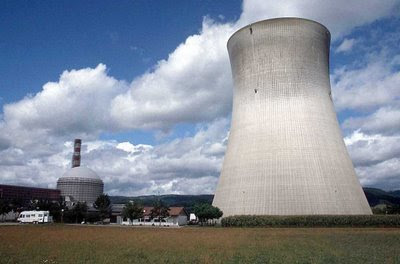 THERE ARE NO SECOND ACTS IN AMERICAN LIVES.

Something happened this week in the American power industry that has not occurred in at least 30 years: Applications were filed with the Nuclear Regulatory Commission to build new nuclear reactors.

The last application was made in 1977, two years before the infamous partial meltdown at near . (One report says it was 1973.)

Nuclear power went into eclipse in the not because it was an unsafe technology, although it did have its issues, but because the knuckleheads who ran TMI and other nuclear plants made a compelling case that the did not take public safety seriously enough and were not to be trusted.

The myriad safety problems hidden by the nuclear power industry came crashing home in admittedly exaggerated form in 1979 in The China Syndrome. The hit movie, revelations that TMI's owners had done a fair share of covering up and the Chernobyl disaster in 1986 further cemented public mistrust, and that more than any other reason is why no nuke plants have been built in the since forever.

But now a new generation of nuclear plants will be coming on line. This primarily is because new designs make them inherently safer and the 2005 Energy Policy Act considerably streamlines the licensing and regulatory processes and provides substantial tax credits to utility companies.

Ironically, there is a second reason as well:

This bring us to the Supreme Court's smackdown of the Environmental Protection Agency back in April.

A divided court, ruling in Massachusetts v. EPA, found that the EPA could not claim that it lacked the authority under the Clean Air Act to regulate greenhouse gas emissions from automobiles.

In a further irony, nuclear power -- which in theory creates no pollutants or greenhouse gas emissions -- is the biggest beneficiary of the ruling because wind power, solar power and other renewable technologies favored by Greens remain too limited technologically and economically to make much of an impact in an American energy economy addicted to fossil fuels.

The applications filed this week with the NRC are for two huge 1,350-megawatt advanced boiling water reactors that would join two existing NRG Energy reactors at the nuclear power plant in , near . The price tag: $6 - $7 billion.

France and Japan have leaped ahead of the once dominant U.S. in nuclear technology in the last quarter century and the reactor vessel heads for the Texas reactors will be manufactured by Japan Steel Works, the only forge in the world now capable of casting the huge structures.

One lingering question is whether anti-nuclear organizations like Greenpeace, Public Citizen and the Natural Resources Defense Council will be able to mount a last-ditch campaign against the revival.

William Tucker writes in The American Spectator that:

"While continuing to play brazenly on public fears (NRDC's latest position paper has the word "Radioactive" emblazoned across the top), environmental groups have also become more circumspect in their arguments. Rather than conjuring up 'silent bombs' and nuclear holocausts, they now make the following arguments:

Nuclear is too expensive. Investors will never go for it."The money would be much better invested in conservation and solar energy."Nuclear power is not carbon-free. The mining, processing and transportation of uranium consume vast amounts of energy supplied by fossil fuels."

The NRC says it expects companies to file applications for about 30 new combined construction and operating licenses in coming months.

I was downwind from Three Mile Island and was not a happy camper. But times have changed and I'm looking forward to nuclear power's belated second act.

Shaun, maybe we can get some built just upwind from Crawford, TX. and Wilson, Wyoming. :)

I'm glad to see you take this position, Shaun. Nuclear may be nasty, but it's got to beat gradual destruction of the planet by slow cooking. The political consequences of oil politics have not been good either.

Now if we could only get that carbon tax proposed by Republican John Anderson about a zillion years ago, then we might start making some real progress.