Why Are You So Freaked Out? 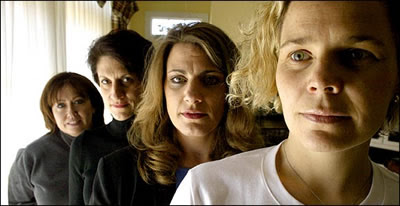 These women are 9/11 widows. They're not afraid of Iranian President Mahmoud Ahmadinejad, who says he wants to lay wreath at Ground Zero when he comes to New York to address the U.N., even though it was Iran that attacked the U.S. on 9/11.

So why are so many Americans freaked out by the possibility that some good may actually come of such a gesture?

Why are you so freaked out?

Posted by Shaun Mullen at 4:10 AM
Email ThisBlogThis!Share to TwitterShare to FacebookShare to Pinterest

I am not- and I think all the idiocy around this visit is just that- idiocy.

Ahmadinejad must be having a good laugh.

I had to read this three times before I figured it out.

Remember How Iran Responded to the 9/11 Attacks?

With all the ruckus over the request of Iranian President Mahmoud Ahmadinejad's request to visit “Ground Zero” during his visit to New York to lay a wreath [1], it is somewhat worth remembering how Iran responded to the 9/11 attacks in 2001.

Knowing how short American memories are and knowing how many Americans share President Bush’s habit of conflating all U.S. opponents and enemies into some sort of utterly fictional “united front,” like the now famous “Axis of Evil” (none of whom had anything whatsoever to do with the 9/11 attacks); I began preparing in the immediate aftermath of the 9/11 attacks. It was fully predictable that there would be an Islamaphobic backlash in the wake of the 9/11 attacks and that people with a vested interest in promoting anti-Muslim hatred would later try to equate the entire Islamic world with the attacks in New York and Washington DC. So, beginning on September 12, 2001, I began compiling the actual responses to the attacks by all the countries of the world with a Muslim majority regardless of their political standing or relationship with the United States. Visiting and saving snippets from official government outlets for these states (embassy websites, Ministries of Foreign Affairs, &c.) as well as searching the media for relevant articles discussing the reactions of these states, I saved all this data for the fifty-two states in question and put it online in the “International Islamic Response” website. After several moves to different hosts, I kept all this data and it can now be found online at: http://iir.internetactivist.org/

So what was Iran’s reaction to the 9/11 attacks?

"On behalf of the Iranian government and the nation, I condemn the hijacking attempts and terrorist attacks on public centers in American cities which have killed a large number of innocent people," President Khatami said in reaction to the worst attack on American soil since Pearl Harbor. ... "My deep sympathy goes out to the American nation, particularly those who have suffered from the attacks and also the families of the victims," he said, noting, "terrorism is doomed and the international community should stem it and take effective measures in a bid to eradicate it." Khatami added that the Islamic Republic of Iran is treading a road to uproot terrorism and to this end, he noted, it will spare no efforts.

All of this was saved in the immediate aftermath of 9/11 at http://iir.internetactivist.org/020.html though of course many of the links are no longer valid, being six years old.

The point was – and remains – to show that contrary to whatever the Islamaphobic hate-mongers might say today, the vast majority of the Islamic world, even including states that the US has had difficult relations with, were sympathetic and supportive in the wake of the 9/11 attacks. The whole supposition that there should be any problem with President Ahmadinejad laying a wreath at “Ground Zero” is just a statement of American ignorance, bigotry, and hated completely unjustified by anything Iran has done.

Anyway, to learn more about the response of the world’s majority Muslim countries in the immediate aftermath of 9/11, visit the International Islamic Response website at: http://iir.internetactivist.org/ Just click on any of the countries listed on the left to see how they responded. Just to save you some time, the ONLY majority Muslim states that were not sympathetic was Iraq (at the time under Saddam Hussein and suffering from US imposed sanctions that resulted in the death of over a million Iraqis [2]) and Afghanistan (then under the Taliban).